If you’re looking for a colourful slot machine with so many features and bonuses that it’s hard to keep track, you’ve found yourself a winner. This slot from Ash Gaming has got so much to offer in both colourful images and special bonus games that you’ll have your head spinning in no time. Not to worry, we’re here to help. For starters, have a look at the highlights of this slot machine. We’ve also given you our top casino to play this cool game at. 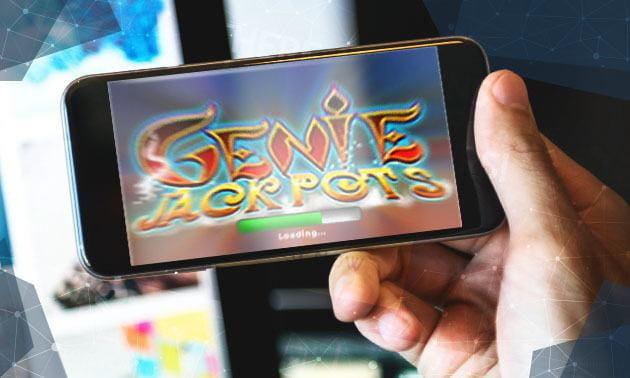 And now it’s time to dig deep into the rules and features of this game. We’ll give you a rundown of all the symbols and their payouts right before we explain what special bonuses you can expect from this slot. We’ll explain how to take advantage of a cool feature in the autoplay and advise you what the mobile version is like. But before we do all that, we’ll start with a nice, free demo of the game. Enjoy it in the embedded game below.

You know that trying a slot machine with play money first is a good idea. But that has never been more true than with this game. And if you’re wondering why that might be, you only need to keep on reading to find out about what intricate ways Ash Gaming have come up with so that you’ll have so many entertaining opportunities to win. And win big, too. But, let’s not get ahead of ourselves. Here’s the demo for you to try and see how the game feels. 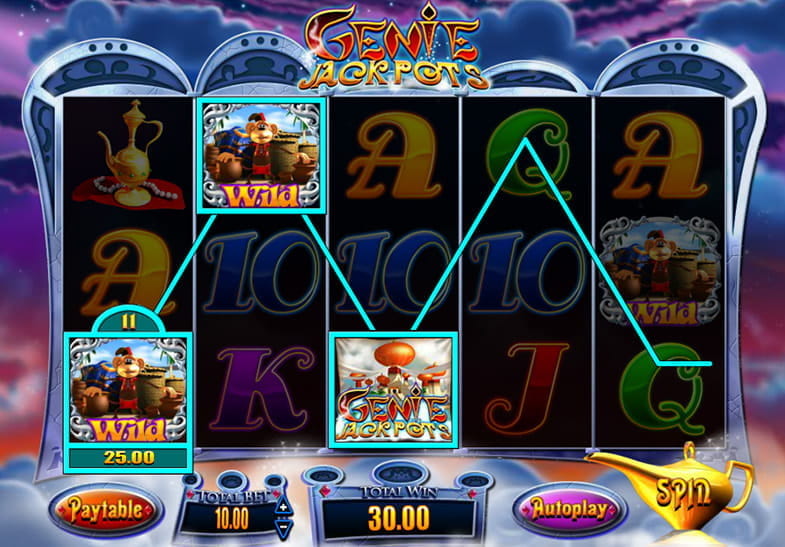 How about those colours? Was the Genie generous enough? I’m pretty sure you’ve come back with a sweet reward. And you’re probably thinking it’s a pity you can’t cash it out. Luckily, that’s something we can fix quite easily. If you’ve enjoyed the game and would like to be able to take those cool rewards home, just head over to our featured casino – LeoVegas Casino and start playing for real.

This slot machine from Ash Gaming is inspired by the stories from Arabian Nights, as can be seen from the game layout, the colours and the symbols, on which we’ll comment in a bit. There are 20 fixed paylines and quite a numbers of features, many of which can be triggered randomly on any spin. There’s a handy button that allows you to select a pre-set autoplay, such as 10, 30 or 50 spins but, most importantly, it will let you spin automatically ‘until bonus’. You can get most of the important information by clicking on the paytable button but if you’d really like to get to know the details, you’d better try the game in demo mode and read on.

As soon as you open the game, you’ll be transported to a world of fairies, magic lamps, and wishes that come true. The reels are set against a background of clouds and the dawn of a new day, which will get you in the mood for the fairytale-inspired symbols. The highest paying symbols are the Wild, which is a monkey, and the Scatter, which is the game logo. Other high paying symbols include a couple of Arabian swords, a magic lamp, and the genie’s hat. The lower paying symbols are cards, represented by the letters A, K, Q, J and the number 10. 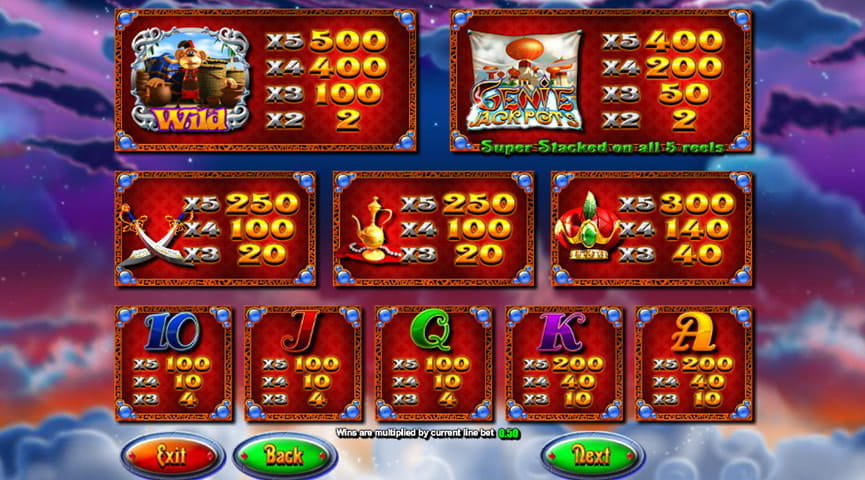 Luckily, you’ll have quite a choice when it comes to the betting range. You can bet as little as £0.20 or as much as £500 per spin. Whether you decide to bet max or not, remember that all wins are multiplied by the line bet. The maximum you can win is x10,000 your bet. However, if you’ve got your mind set on that awesome progressive jackpot, which is currently around £100,000, you can save yourself some cash and not bet the maximum, because the jackpot is awarded randomly as part of the 3 Wishes Power Spin.

All the Special Features

Before we get to the bonus game, there’s a special feature you’d love to get especially since it is triggered randomly after any spin. It’s called the 3 Wishes Power Spin and though it starts the same way, it can have a number of different endings. At first, you’ll be invited to pick one of three lamps to reveal the bonus, which can be one of the following five. The Genie Wilds + Respin can turn any position into a Genie Wild and award a re-spin. The Genie Wilds All Pays Doubled can also turn any position into a Genie Wild while doubling all pays. The Infectious Monkey Wilds allows the Golden Monkey symbol to ‘infect’, i.e. turn every surrounding symbol into Wild. One of the bonus symbols guarantees that you’d get the respective bonus game. Finally, the Progressive symbol instantly awards the progressive jackpot.

The two bonus games can be triggered by landing 2 Bonus symbols on reels 1 and 3 and either of the special Bonus game symbols on reel 5. The two games are the Magic Carpet Bonus and the Mystery Win Bonus. The first one introduces you to another clouds background that invites you to pick magic lamps with a number corresponding to the number of steps you’re allowed to take on your way towards the ‘big money’ until you pick the one that says ‘collect’. The second one leads you to a cave where the genie will open a treasure chest and determine the minimum amount of coins you’re going to get. You’ll have the chance to increase that amount by picking the correct lamp or collect it straightaway.

The Mobile Version of Genie Jackpots

Not only is the game just as fun on the go as on a desktop computer but it’s actually better. For once, it is somewhat easier to play with simple taps. And then again, you have more control over your gaming. For example, when playing the mobile version, you have a better say when it comes to autoplay – you can not only select the number of auto spins but also if those should stop at particular loss, etc. The mobile version works well no matter if your handheld devices run on Android or iOS.

Our Verdict and Other Slots

The fairy-tale theme might fool you into thinking Genie Jackpots is a simple game even a child can play. However, there’s so much more to this Ash Gaming slot machine than what seems at first sight. The many ways you can increase your fortune are simply astounding. The bonus games and the special features that don’t even require a winning payline are just great. And if that’s not enough, have a look at that juicy progressive jackpot you’re eligible for no matter what your triggering stake is. If you like the fairy-tale theme, try also the following slot machines and don’t forget to check which are our top-rated Novomatic slot games that you can find around!

Read Review
Jack and the Beanstalk

To sum it up, Genie Jackpots is a lovely slot inspired by the genie coming out from the magic lamp from Arabian Nights, which has so much to offer in terms of bonus games, features, and, last but not least, wonderful payouts. The symbols, the background, and all the bonus rounds play out the genie theme nicely, whereas the prizes you’ll get when playing the features will make it easy to believe your every wish can come true. And that’s even before we mention the sweet progressive jackpot that you’re eligible to get randomly during any spin.