Can you imagine a world without the Internet? Since its conception, the World Wide Web has become an essential part of our lives, and whether we like it or not, we are largely dependent on it. The Internet changed the way many industries work, and spawned countless new ones. One of the fields that was affected greatly was gambling, with the introduction of online gambling and in this post we are talking about online casino games, sports betting, poker, and the likes of that.

Greetings to the United States! Find out More About the History of Gambling
All Sites Licensed by the UKGC
Last Updated on 9 Feb 2021 by Chief Editor Aidan Howe

The first-ever real money online casino was launched back in 1996 by InterCasino – a provider that is still popular amongst gamblers today. Fast forward 20 years and the concept of online gambling has not simply caught on, but accounts for more than a quarter of the whole gambling market on the Old Continent. What this means is that nowadays we have literally thousands of the best online casinos, sports booking shops, online poker sites and a lot more!

Online gambling is a thriving, billion-dollar industry and everything out there suggests that it is only going to get better and more popular. That’s why we have made a full list of online gambling sites for you to explore. In this article, we are going to take a look at the events that made all this possible. Let’s get started with this not-so-brief history of online gambling!

The History of Online Casinos

If the creation of online casinos can be contributed to just one major event, that would undoubtedly be the implementation of the Free Trade & Processing act by the government of Antigua and Barbuda. This law was passed in 1994, and gave this small Caribbean nation the power to grant licenses to companies that want to start online casinos. In that very same year, more than 4,000 miles and an ocean away, another important event took place – a software company called Microgaming was established on the Isle of Man.

Fun Fact #1 The Gaming Club Was the First Online Casino

Back then the company had a very small team and not much in terms of a budget, however that did not prevent them from becoming responsible for the creation of the world’s first fully functioning online casino. It was called The Gaming Club and had very little in common with today’s online gaming venues. Nevertheless, it took the world by storm as it gave gamblers the chance to play casino games on their computers in a time when most people were still struggling to get a grasp of the concept of the World Wide Web. Throughout the years, many other companies have made similar claims and have tried to take credit for their work. However the incredible dedication and hard work of the guys at Microgaming, as well as their incredible achievements later on, have made them a true symbol of innovation and have established the company as the real leader in the world of online gambling to this very day.

Less then a year later, in 1995, another important player made an appearance. CryptoLogic is a company that specialises in real money transactions over the Internet and at the time their product was the missing piece to creating a real money online casino. They launched InterCasino – one of the oldest online casinos that still function to this day and the very first one to offer players the chance to bet real cash. CryptoLogic revolutionised the way money transactions work online, making the process fast and safe for players. Thus, they fully deserve a special place in the online gambling hall of fame side by side names like Microgaming.

The Popularisation of Casino Sites

It did not take long after the launch of the first online casinos, for people to realise their huge potential. In no time they became very popular amongst players as they offered a new and exciting way to enjoy gambling. In the months that followed, many companies were inspired by the striking success of InterCasino and followed their example. Numerous casinos emerged, and the field became extremely competitive. Each operator strove to be the best, to offer the highest number of titles or the largest variety of game types. And because computer technologies were a big limiting factor at the time, companies had to think outside the box to make people choose their product. As a result, providers came up with various schemes in order to attract more customers than their competitors and this is how welcome bonuses came to be.

Due to the heavy competition amongst online casinos, the quality of the games and software quickly skyrocketed. More and more features were being introduced to the mix, and soon enough online casinos were all the craze. Things like multiplayer games themed slots, and progressive jackpots were implemented, thus making online casinos even more appealing to the masses. Since then, innovation and high quality have remained two of the main goals of software developers and providers alike and they have been working hard towards providing players around the world with the best possible online casino experiences.

As time went by and technologies improved, the overall players’ experience was getting better and better. The graphics were of much higher quality, sound effects became far more realistic and software flaws were a rare sight. Yet, the vast majority of hardcore gamblers preferred the old ways of playing at a traditional brick-and-mortar casino to giving their online equivalents a try. This was all about to change, however, with the introduction of the live dealer games. Modern technologies allowed players to watch live streams while playing, thus getting that genuine casino atmosphere that many people miss while playing online. Nowadays, live dealer games are preferred over RNG ones by most gamblers. If you take a look at our list of new online casinos, you will notice that most of them launch with a live section in place.

Introducing Mobile Casinos – the Way to Gamble in the 21st Century

There was yet another milestone that online casinos had to reach, before becoming the widespread phenomenon that we know today. The rise of mobile devices made it necessary for online casinos to adapt. Today’s smartphones and tablets are devices of endless capabilities and even the most budget options offer many times the computing power of the PCs and Laptops of 20 or ever 15 years ago. As a result, all reputable casinos out there have invested tremendous amounts of time, effort and money into making their venues mobile friendly. Without boring you to death with the technical side, what this means is that they will have a version that is optimized to run on any recently released smartphone or tablet just as well as it does on modern-day computers. Whether you are a seasoned mobile gambler, or you have never tried playing on the go before, we thoroughly recommend that you check out our list of the best mobile casinos out there, as their amazing quality and exclusive bonuses will literally blow your mind!

The Origins of Online Sports Betting 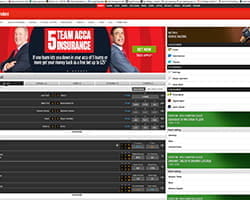 Shortly after the popularisation of online casinos, online sports betting followed in their footsteps. The very first website that offered this service was Intertops, which was launched in 1996. Existing bookmakers were quick to create websites of their own, and numerous new companies emerged on the scene. Similar to the situation with casinos, the field of online sports betting was highly competitive, and operators started offering bonuses, free bets, enhanced odds, and other specials, in order to attract more customers.

In 2002, several online bookmakers introduced live betting, allowing their customers to place wagers as the sports event was happening. This became very popular with gamblers, and further boosted the popularity of the online betting sites and made them superior to the traditional, land-based bookmakers. Even though the latter still exist and do a very good job, the former is definitely preferred by people worldwide.

Nowadays, online poker is more popular than ever. The whole thing began in 1998, with the launch of Poker Planet – the first website to offer online poker. Due to the low speed of the dial-up Internet and other technical problems, the website didn’t always function as intended – but that did not stop players from getting hooked on it. Eventually, better sites emerged, and the industry took off. Nowadays, players have the chance to play at some of the best online poker sites, that can easily challenge the most elite land-based tournaments and establishments in terms of the number of game variants and the quality of the experience.

In 1999, a new website called Paradise Poker was launched, and it worked like a charm. On top of that, it featured several versions of poker – like Texas Hold’Em, Seven-Card Stud, Omaha, Omaha Hi/Lo, H.O.R.S.E, Five-Card Draw, and 2-7 Triple Draw, to mention but a few. The site became very successful and attracted many players.

An event that truly changed the landscape of online poker is when a man by the name of Chris Moneymaker won the World Series of Poker in 2003, taking home the amazing prize of $2.5 million. He qualified for the tournament by playing a $40 tournament at PokerStars – one of the most popular websites for online poker. When Chris managed to win this awesome reward, everyone started dreaming of achieving the same – which led to a sudden boom in the popularity of online poker.

Copy the code below if you want to embed our gambling history infographic on your site:

Online Gambling Is More Popular Than Ever

Today, online casinos, bookies, and poker sites are a major part of the gambling scene. The benefits they have over traditional venues are too many to ignore. The standards are higher than ever, and players have the chance to play outstanding games and win real money. If you are looking to start your own gambling career at an online casino, make sure you pick one from our list of recommended gambling sites or the best online casinos that accept PayPal. You can also visit our Daily Fantasy Sports UK guide if you’re interested in sports and want to build your own dream team. Good luck!

At the very end of your guide to the history of online gambling, we would like to take some time and address some of the most frequently asked questions on the topic. We hope that our short and comprehensive answers help you clarify any uncertainties that you might have had!

🎲 When did gambling start?

There is evidence of gambling that dates back to more than 12,000 years ago, long before there was any written history. Six-sided dice that are more than 5000 years old have been found in today's Iraq and Syria and we have written documents telling us that gambling houses were a common sight in China, over 3000 years ago.

🕰️ When was gambling invented as we know it today?

Even though gambling has been a part of human society for as long as history remembers, the creation of the casino is a rather recent event. It was in 1638 that the Casino di Venezia opened its doors for the first time, thus establishing gambling as we know it today.

📜 What is the history of gambling?

The history of gambling represents the road of mankind to improving the oldest type of entertainment that we know of. And as online gambling is considered to be the latest and greatest in the field, we wholeheartedly recommend you check out the best online gambling sites currently available!