Author: Benjamin Webb
There are many things with which Italy is known all over the globe. Be it pizza and pasta, art, architecture, music or fashion, there is hardly a soul out there that hears the name of the country and doesn't immediately relate it with something similar. But there is another aspect that few know. Because gambling is in the routes of Italy and even more, in specific parts of it, like Naples. Join us in our venture through the city of Pulcinella and learn more about the magnificent art of Neapolitan cards and Italian gambling.
Share on Pinterest

Italian Playing Cards and the People That Play Them

We chose a bit less ‘standard’ way to start our review. Instead of simply diving in the topic of Neapolitan cards, we first want to show you the city and to make you… feel it. Naples, or Napoli, as it is in Italian, is much different than any other city that we have seen. Every place has its own character, but Naples goes the extra mile effortlessly. Neapolitans have a unique language, music, culture and even cards and gambling casino games.

The city has many symbols, among which is the Pulcinella, which we mentioned earlier. It is a character in the puppetry of Naples, part of the ‘Commedia Dell’Arte’, together with the more popular Arlecchino or Harlequin. Another one is Partenope, a syren, that fell in love with a centaur, called Vesuvius. Jupiter, angered by their love, turned him into a volcano and her – into the city of Naples.

As you can imagine, people that are living right under a quite deadly and unpredictable volcano are quite fatalistic. All in all, Neapolitans are very proud, very funny and very warm. They joke with things that might surprise many, they have a note of sarcasm that might strike you, but they also play games that will enchant you if you are patient enough to learn. We must tell you – forget the regular French cards with hearts and spades, forget the written numbers and welcome to the art of Neapolitan cards!

The design of the Neapolitan cards is unique, that’s for sure. There are some common points, though. Like the suits. Just like in regular French cards, they are four. But are different than the ones you are familiar with. The first one is called ‘Bastoni’ and the closest translation to it is ‘sticks’. The second is ‘Spáde’ and it means ‘swords’. The other two are called ‘Denari’ which stands for ‘money’ and ‘Coppe’ – ‘cups’. What you must keep in mind is that the deck consists of 40 cards only.

As you most likely guessed, the drawings on the cards correspond to the names. There are three face cards from each suit. The ‘Fante’, or the knave, is the lowest one in order of strength. An interesting fact is that also in French cards, the Jack was, once upon a time, called knave. But since the letters used for King and Knave are the same, the name was changed in order not to create confusion. After the Fante comes the ‘Cavallo’, which is a horse. The highest card is the ‘Re’ or the King.

From there on, you have the equivalents of the numbers in a deck of cards. The difference is that instead of digits, you will find the icons of the suit representing the number – two cups for 2 etc. There is one more difference. The Ace is represented by one symbol and in some of the games is the highest card, while in others is the lowest. And while talking about the designs, the drawings and the values is interesting, now we will go to another, far more appealing subject – the games.

We Present You ‘Scopa’ – The Queen of Naples

Let’s go to the first game that you can play with Italian cards – Scopa! What is known about its history is that even back in the 18th century, it was widespread all across Italy but the moment in which it was invented is unknown. The name translates in English as ‘broom’. This relates to the main idea of the game – to ‘brush’ from the table all the cards that are played.

The game can be played also in teams, with the overall score being calculated in the end. The dealer gives three cards to each player and then turns four cards, face-up, on the table. What you have to do is take away those cards, but this is where it gets tricky. With one of the cards that you are holding you can take a face-up card only if it is from the same value. Another option is to take two cards that sum up to the value of yours. For example, if you have a 7 in your hand and there is a 7 on the table, you can take it. Or if there are two cards with a value of 5 and 2, you can ‘sweep’ them both with your 7.

In case you do not have cards with which you can grab anything, you have to place one card of yours, face-up, together with the other ones on the table. The logic that you must follow is to always put the lowest possible value since the points will be calculated at the end of the game and the more high-valued cards you have in your stack, the higher your score will be. Plus, the bigger value allows you to grab more than one card too!

If you are wondering what the idea in aiming to capture more than one card is – it is because of the final score. The player that has the bigger pile wins one more point. The one who has more ‘denari’ (coins) cards gets a point too. If you are able to sweep the seven of coins, you also get an additional reward, as well as if you have more cards with the value of seven than the other players. You most likely got it by now, but the 7 of coins is actually the most desired card in a game of Scopa since it can boost your score in four different ways.

There are several variations of the game, like Re Bello, or ‘The Beautiful King’ where the King of coins also gives additional scoring. Scopa is widely played in different countries, like all the ex-Italian colonies and even Brazil, where it is surprisingly popular. On top of it all, in case a trip to Naples for buying a deck of cards doesn’t really seems reasonable for you, you can just order it on Amazon, for example, for £5, give or take a few.

Another two games that stand out are the Tresette and the Briscola. They can be played by 2 or 4 people and the main goal is to get the highest score. Teams can also be formed in both, but while in Briscola the talking between the players is completely okay, in Tresette any verbal or non-verbal signals to your partner are considered a game breaker. This is also underlined by the Italian saying that –

Each card in the game of Tresette scores 1/3 of a point and only the Ace gives you an entire one. The last player who tricks gets one point which makes the overall total 11 and two thirds in a deck. The game finishes when a score of 21 is achieved. And while we said that communication and ‘tells’ between the players are forbidden, there are three signals that you can safely use:

Keep in mind that the last of the above ones, in some regions is considered as illegitimate tell and might lead the game to an end. Furthermore, there are many variations and it is quite important to agree on the specific rules with the other players before to begin, so no unpleasant surprises happen during the game.

Briscola is played with three cards in the player’s hands and two more on the table. One of them is turned face-up, while the other one is face down. The latter is the ‘Briscola’ and it shows which is the trump suit for the game. You can retire the ‘briscola’ only if you have a deuce of trump, before the game to have started.

Here, you are not forced to follow suit, which simplifies the gameplay a lot. Once there is a winner of a trick, he gathers the cards from the table and puts them in a pile, face down. At the end of the game, the score is calculated to determine the winning player or team. Also, Briscola has some variations, which are mainly about the ranking of cards. There is a game for five players called Briscola Chiamata, while in Sardinia, the three can be substituted by a seven. 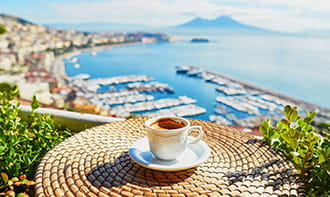 All in all, Neapolitan cards can open a whole new universe infront of you, and the more you discover about gambling in Italy, the more you will be amazed. After all, we talked only about the three most spread and played games, while many more exist. We cannot deny that the design and the graphics of these cards are much more appealing than the regular French ones with which we are familiar and used to. And if one beautiful day you end up going to a trip in Naples, make sure you buy one deck and sit in a local coffee, preferably away from the main tourist destinations, where you hardly see natives at all.

Once you start checking the cards out and placing them on the table, be sure that a Neapolitan will approach you and before you know it, they will be teaching to play Scopa, Tresette and you will get an insight information about the best places to eat pizza, pasta and Sfogliatella in the city.

View All Posts
Check Our Hottest Offers For January 2022
Winstar Social Casino
6x (500%) More Chips on 1st Purchase
Claim Offer
Gambling Guides
Popular Articles
Beginner Guides
Recommended Casino Sites
What Is Your Favourite Casino Game?
Submit
Results
Open Special Offers
Winstar Social Casino
6x (500%) More Chips on 1st Purchase
Claim Bonus
18+ Winstar Social Casino does not offer “real money gambling” or an opportunity to win real money or prizes. It is intended for an adult audience and entertainment purposes only. Due to this app’s authentic nature, all users are required to be 18 years or older to play. By downloading the app, you agree you are at least 18 years old and comply with all local laws pertaining to social gaming. Practice or success at social casino gambling does not imply future success at “real money gambling".