If you’re a Guns N’ Roses fan, it’s a no-brainer that you’d want to try this slot. However, you don’t need to be a fan to appreciate it. With its entertaining features that will take quite some time before you’d even begin to get bored and its awesome payouts, this game is one that any slot machine lover will be happy to spend time on. And just because GN’R is truly wild, there is a selection of wild symbols – an expanding Wild, an overlay Wild, and a stacked overlay Wild. You’d be crazy to miss out on this amazing slot from NetEnt. 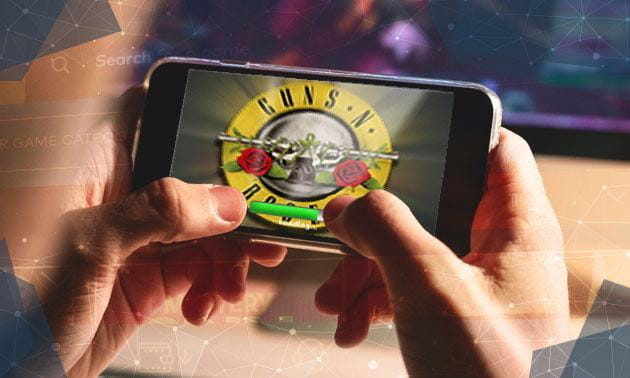 You might know all the band’s song lyrics by heart but that won’t do you much good when playing the slot. So, it’s wise to become acquainted with its rules. That’s why we’ve made sure we present the symbols, the features and everything that might be important to your gameplay. In this Guns N’ Roses slot review, we’ve also embedded a demo version for you to try below, which would cost you practically nothing. So, go ahead and try it right now!

A Demo Version of the Guns N‘ Roses Slot

You’ve read the name Guns N‘ Roses and you’re already anxious to get your hands on this rewarding slot? Well, as much as we find this slot deserving your attention and as much as we’re sure you’ll fall in love with if at first sight, it’s always better to try a game in demo mode first – that would give you the chance to try out the features, get to know the symbols, the Guns N’ Roses slot RTP and learn how to adjust the settings in order to personalise your game. 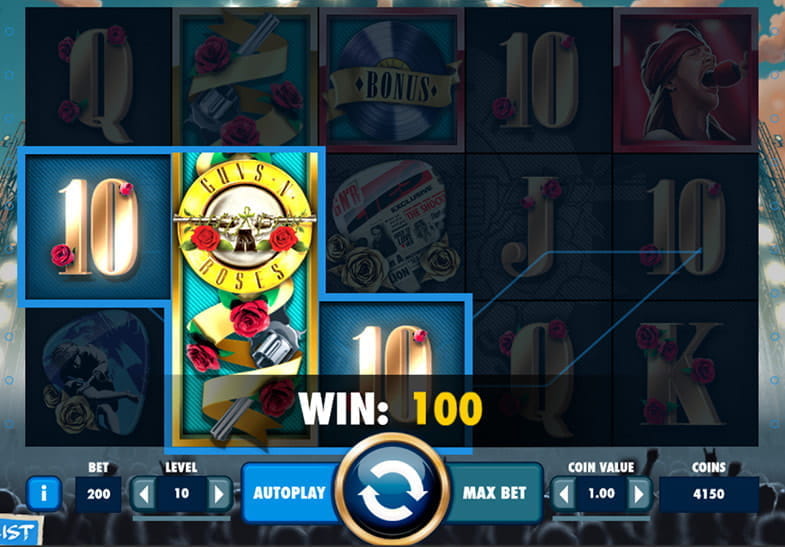 How about that slot machine? If you’re thinking a game could hardly get any more metal than that, you’re probably right. We are yet to see a slot that is more metal than this NetEnt instant classic. And the Guns N’ Roses slot RTP rates are pretty sweet, too. I haven’t had many games that give out big wins, mega wins, and super mega wins that frequently. I bet you’re already anxious to cash out those wonderful winnings, so if you’re done with the demo, head over to our preferred site for this game – LeoVegas Casino.

Overview of the Game

But if you want to get ahead with this slot, do yourself a favour and spare a minute to read about its basics. It’s a 5-reel, 3-row, 20-payline slot from Net Entertainment dedicated to one of the most popular bands in the world – Guns N’ Roses. The theme is very well-developed and fans of rock will easily recognise the band’s influence in the symbols, the background setting for the reels which is a stage with the crowd cheering every time you win, and the special features, which are quite a lot, so we’ll discuss them in detail below. There’s an autospin feature which allows you to do something else while the reels spin automatically for a set number of times between 10 and 1000.

The Rock Symbols of This Slot

From the intro and well through the whole game, you’ll see many guns and roses adorning the lower-paying symbols, which are the letters A, K, Q, J, and 10. Also, the high-paying symbols are Axl Rose, Slash, and Duff McKagan – the three most important members the band. The other two high paying symbols are guitar picks from their 1988 album ‘GN’R Lies’ and their 1991 album ‘Use Your Illusion II’. The game logo is an Expanding Wild, which can appear anywhere on the reels except reel 3. The Appetite for Destruction Wild is an overlay Wild which can appear in one of three positions. The third type of Wild you’ll see during the Encore Free spins feature is a band member symbol appearing on reels 3,4 or 5 as an overlay stacked Wild. 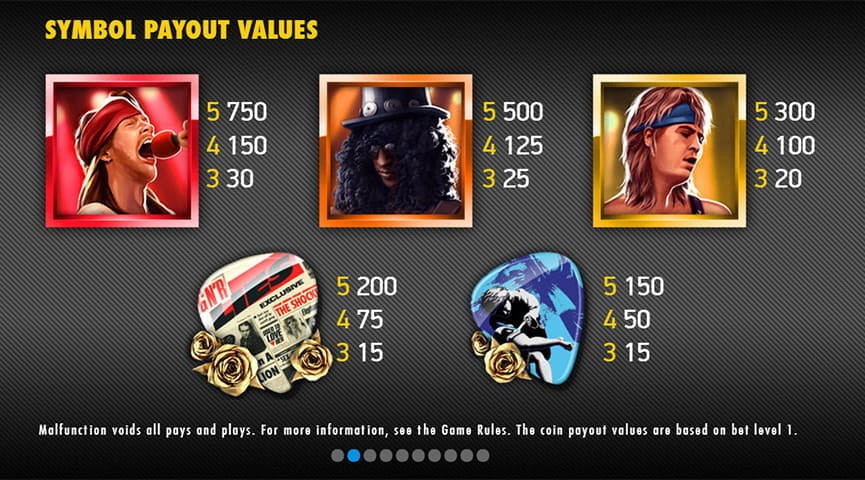 With three kinds of Wild symbols, a bonus game and the high Guns N’ Roses RTP rates, it is very likely that you get a wonderful payout. However, the surprises don’t stop there. There are two other features which are both triggered randomly. The first one is the Legends Spins, which gives you 2 re-spins and features a Stacked Wild. The second one is the Solo Multiplier, which awards a multiplier of between x4 and x10 to a winning line. You can bet between £2 and £200 per spin and the maximum win available is x750.

When you get three bonus symbols, appearing on reels 1, 3 and 5, you’ll see the Bonus Wheel with sectors in three colours. These correspond to three types of bonuses – The Crowd-Pleaser Bonus Game, the Encore Free Spins, and coin wins. If you get the last option, you’ll know how much you’re winning instantly. If you get the Crowd-Pleaser Game, you’ll have the chance to pick music-related items, such as a mic, a bass drum, and Slash’s guitars including his signature Gibson Les Paul. Each item is assigned a coin value and if you amass enough cash, you’ll proceed to the next level.

When talking about how often you get the special features, we must admit the game logo, which is an expanding Wild, shows up almost every other spin and the random features are quite easy to get as well. The bonus game doesn’t come as often as a player would like to but when one does land the three Bonus symbols, a player would really appreciate the awesome feature and its variety. As far as payouts are concerned, I personally have never had that big wins and that often, too, at any other game.

Play the Rock Reels on the Go

The Guns N’ Roses slot machine is available for mobile devices and like the other NetEnt Touch slots, it is great to play on the go no matter if you’re using an Android phone or tablet or if you’re the proud owner of an iPad or iPhone. There are some differences, however. For example, you don’t get the set list you would at the desktop version but you’d soon enough decide to mute the game and play whatever GN’R or other albums you like as the 5 songs would hardly be able to entertain you the whole time you’ll be playing this slot. The Guns N’ Roses slot variance is so high that it will make you play more and more.

Guns N’ Roses online slot is definitely the rock show that you must try. With the wonderful sounds of your favourite band’s hits, you can rock the reels and get prizes that will blow the amplifiers. This slot machine is definitely entertaining in terms of graphic quality and sounds, but we’d like to recommend you a few other games that might as well interest you. Although none of these offers the same kind of fun as the slot we’re currently reviewing, yet, they have their special features that will give you the chance to try out new slot gameplay strategies. Some of them also have a juicy jackpot to further get you excited while playing.

We suppose that now you already like Guns N’ Roses online slot. And what’s not to like? It has an awesome theme, which has prompted the creation of many cool features, all of which guarantee a bigger win. It is generous, with smaller wins coming regularly and big ones that hit you at a glance. It puts you right in the middle of the action, where you’re the star of a rock concert with a huge crowd and pyrotechnics turning your every win into a celebration. So, what are you waiting for? Try the game for free and hurry up to start winning real prizes. Or if you want a bit more insights, check our page about the rest of the UK online slots.