Author: Benjamin Webb
You may have already seen the infamous poker scene in Casino Royale – if you haven’t watched the movie yet, we strongly recommend that you do, it is a fantastic treat for Bond and poker fans alike. Casino Royale is a spy film to its very core, but also deals heavily with gambling themes due to the setting. The rules of the game – No Limit Texas Hold’em - are observed meticulously, with independent poker experts like Thomas Sandbrook providing professional advice. You get the chance to catch a glimpse of a high-stake tournament, with British agent 007 trying to foil the plans of terrorist banker Le Chiffre. Their game of bluffs and double-bluffs reaches an exciting climax, but is it an accurate representation of what you would actually see in a poker tournament? Beware, for there are spoilers ahead!
Share on Pinterest

A Game of Poker at Casino Royale 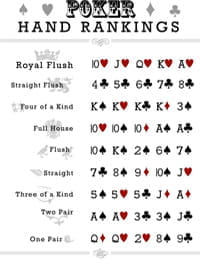 Four men sitting around a table. Four pairs of cards in their hands. Over $120 million in the pot. Each of them has gone all in, fully convinced he holds a winning combination. With the river revealed, we have the Ace of Hearts, the Ace of Spades, and the 4, 6 and 8 of Spades. It’s time for the players to show their hands. The first one reveals the King and Queen of Spades, giving him a Flush – the fifth strongest hand in Poker. The second player immediately smiles and shows a pair of 8s – which make a full house with the cards on the table.

The third one is the villain of our movie, the infamous criminal banker Le Chiffre. He holds the Ace of Clubs and the 6 of Hearts. Another full house – and higher than the previous one. At this stage, Le Chiffre is fairly confident in his victory, because his hand can only be beaten by Four of a Kind or a Straight Flush. He already holds one of the aces, and thus he knows no one can have four of a kind.

This only leaves the straight flush, but to gather one the last player needs to hold both the 5 and the 7 of Spades. As you can imagine, the odds of that happening are astronomically low, which gives our villain the chance for one last, smug smile, with over $100 million within reach. However, he has made just a slight miscalculation – because the man in the final seat happens to go by the name of Bond. James Bond.

Cards Are Not All – The Final Scene Explained

The groundwork for the exciting finale has subtly (and not so subtly) been laid out throughout the entire movie. Bond tussles with Le Chiffre several times, losing the initial games. He notices how Le Chiffre manages to bluff his way through rounds where he holds relatively weak cards, and even catches the villain’s physical tell – a small twitch of the hand towards the scar on the eyebrow. However, Le Chiffre also realises that Bond has read him, and uses this knowledge to deceive him, winning a temporary victory. By the time the final game rolls around though, Le Chiffre is convinced that he has Bond’s measure, and this proves to be his undoing.

“In poker you never play your hand. You play the man across from you.” James Bond

The clash between the stone-faced duo of Daniel Craig and Mads Mikkelsen showcases the true nature of poker as a game of information and misinformation – much like spying. The combination of cards that you hold is important, of course, but when dealing with real players, reading the table and controlling the game flow can be much more crucial. This is why setting up the grand finale of the poker tournament takes the film directors quite a while – they are trying to show how a good poker player needs time to study his opponent and to build a misconception about himself.

However, the Game Itself Is Not Realistic

Even though a lot of good work has gone into the Casino Royale, the producers have aimed at entertainment rather than realism – and that’s only natural. A real-life game of poker would never unfold in the same way as the one in the movie.

First off, the stakes never get so ludicrously high. At poker sites in the UK, for instance, the highest pot ever reached around $600,000 – which is still lower than the blind in the final game of Casino Royale. In brick-and-mortar casinos, multimillionaire Andy Beal earned the fame of having won one of the biggest ever single hands – and it grossed out at $11.7 million. There have been some recent rumours that Macau games reach ridiculous stakes, but even then, we are still speaking of $13-$15 million tops. Nothing even remotely close to the $120 million which we saw at Casino Royale.

Secondly, the final distribution of cards in the movie is highly improbable – as you might’ve already guessed. True, we did not see any of the classical poker winning hands that movie makers love. There was no royal flush, neither four of a kind. What is improbable here is the fact that all four players held very strong hands – even the poor chap with the white hair had the highest possible flush, which prompted him to go all in. At Texas Hold’em, the probability of drawing a flush – any flush at all – is about 3% (refer to this article about poker probability). This goes down to 2.6% for a full house, and 0.027% for a straight flush – which Bond had.

Now, imagine the odds of all those hands occurring in the same round. They are so ridiculously miniscule that your calculator would code the answer to save space. Most poker games, no matter how high the stakes, are decided by simple hands. You could see a several-hour-long tournament struggle ended by a pair of 4s.

This could explain why all the players went all in – they genuinely thought they held winning hands. Going all-in is not at all unusual in poker. It is a common last-ditch grasp at getting back in the game, but also a calculated bluffing strategy. What is rather unrealistic is that each of the four players did it and that they waited for the river to be revealed. This was a truly epic way to end the tournament, but in real life, betting is much more complex. The opening bets of a poker player are usually one of the most important indicators about the cards he is holding – or at least the cards he wants you to think that he is holding!

In fact, betting patterns are a far more significant tell than the over-pronounced tick that Le Chiffer had. Sure, many people give physical tells, but they are extremely hard to notice. This is the reason pro players would often wear sunglasses during the matches – not to look cool, but to hide any changes in their pupils. This leads us to the last unrealistic part of the Casino Royale poker scene: the round of checks preceding the last card. Players would usually be testing the waters or raising the pot size long before the river is revealed. In the particular case, Blond’s competitors should have had much stronger reactions after the flop was revealed.

With all that said, Casino Royale was a great watch, and offered a highly entertaining look into a (somewhat over-exaggerated) game of professional poker. It is quite different from the original 1967 movie, which featured a game of baccarat instead of poker – during the 60s, baccarat and roulette were the go-to high stake games in the gambling world. One has to wonder what changes await us during the next few decades. At the very least, we are still waiting to hear who will become the next James Bond after Daniel Craig retires from the franchise. Anyway, if you are not really good at poker or you are simply a fan of other types of games, you can check our list of the best online gambling sites in the UK too!

The Gaming Capitals of The World