Author: Benjamin Webb
Dive into the world Down Under with our top 10 Aristocrat slots list. This Aussie gambling producer has made several technological innovations that disrupted the industry throughout the years, so it is worth testing its creations. Find the top 10 Aristocrat video slots and highlights for each, in the table below:

This slot is based on the German war hero, Manfred von Richthofen, known as Red Baron from the gruesome WWI. While the graphics are outdated, the symbols include a zeppelin, a plane and the baron himself. We have included free demo links to the games for those of you who are already asking, ‘Where can I play Aristocrat slots online?’. 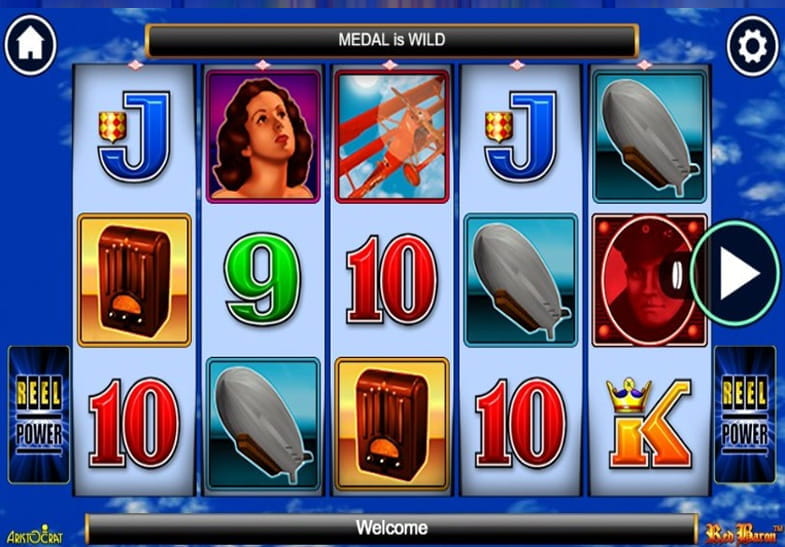 Red Baron offers a single bonus round feature which is activated when you land on three of the scatter symbols in the following reels: 2, 3 and 4. When you activate the free spins, you get to choose from 5 different ‘missions’. Each offers you a chance to trigger a multiplier if you correctly guess the exact number of planes that will appear. Despite its’ old-fashioned look, this game surely deserves some praise and can be found at most of the best slot sites.

This game transports you right into the land of pharaohs. Queen of the Nile II is inspired by the dark-haired beauty, Cleopatra. Obviously, the symbols, graphics and sound effects align perfectly with the theme. Without a doubt, this sequel is far superior to the original because of the increased payouts, paylines and betting limits. 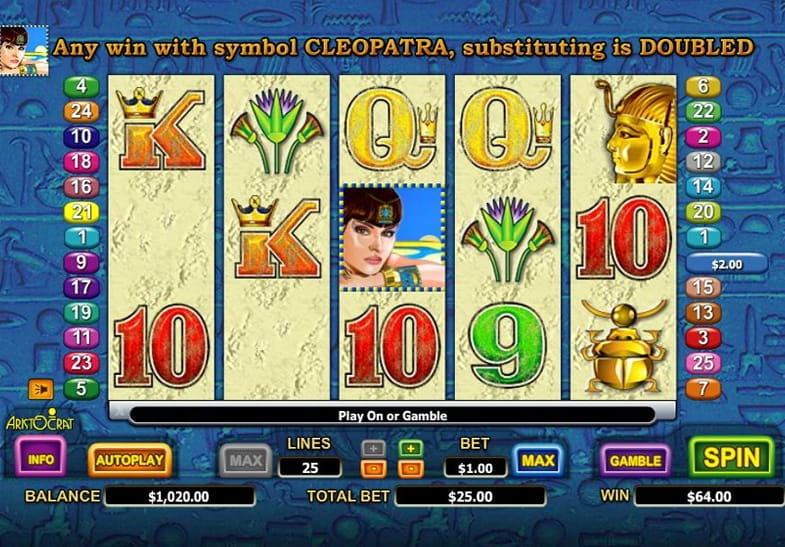 Queen of the Nile II mirrors elements of the original game to make it easier for new players to enjoy. Get 3+ pyramid symbols across the reels and trigger the free spins feature. Then, choose between four combinations of free spins and multipliers. We suggest you take your time before you select an option.

An ancient Chinese story told from one generation to another, says that the ruler has settled high in the mountains and is guarded by a golden dragon. So, Aristocrat based the Dragon Emperor slot on the fascinating legend. Symbols like jade necklaces and treasure chests will help you enjoy big payouts when playing this game. 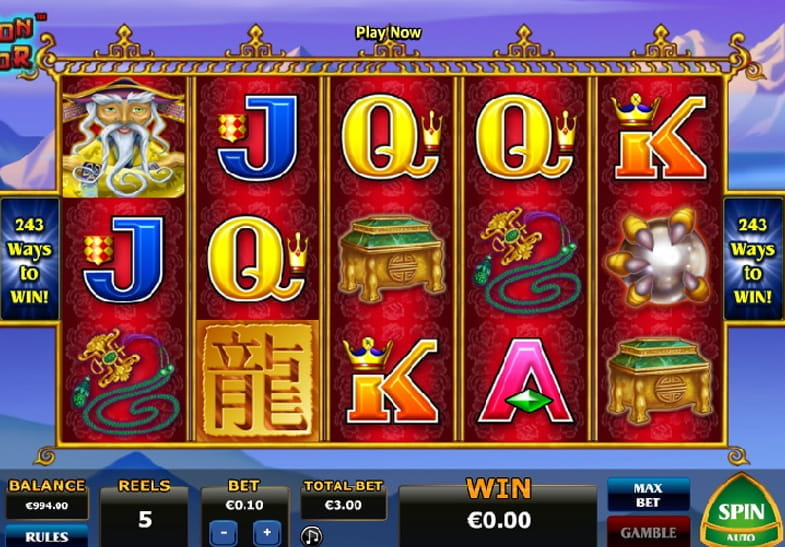 The scatter symbol of this game can grant both rewards and free spins. It is important to note, that currently Dragon Emperor is only available online for players in Europe. However, if you happen to live outside the continent and want to play Aristocrat slots online, we suggest you check out the list of all Aristocrat slot games.

We continue our journey back in time with Werewolf Wild. Set during the 1900s, in the Victorian streets of London, this cartoon-like slot offers great fun. The focus is on the werewolf’s adventures in the metropolitan city. Among the high paying symbols are the gentleman, the maid and the copper. 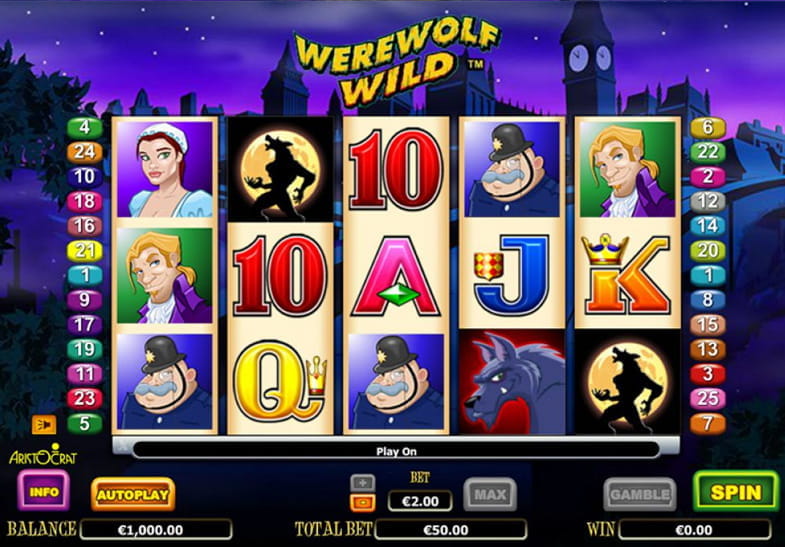 Werewolf Wild offers three brilliant special features. First, when the free spins are triggered, the wild werewolf turns every human it touches into a werewolf wild. Similarly, the Claw-swipe feature transforms other symbols into wilds on random during the main game. Lastly, the mystery coin feature rewards directly, and the payout is completely random. For the best experience possible, we suggest playing this slot at some of the top real money online casinos!

Zorro is next in our top 10 Aristocrat slots list. It is based on the fictional character known as Don Diego de la Vega by day and Zorro by night. As you would have suspected, the wild symbol is Zorro himself, and the scatter is his black horse. Other icons include the stunning Juliana and evil Monastario. 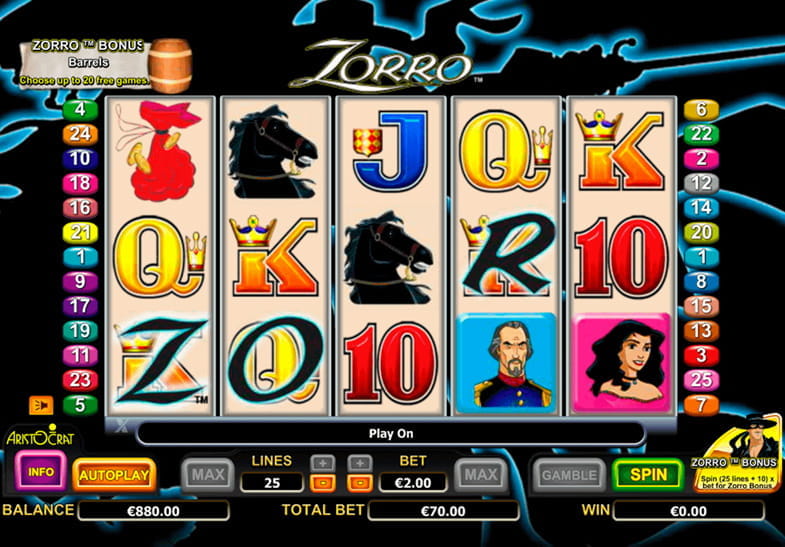 The bonus round is triggered only when all five letters of ‘Zorro’ land across the reels. There, you get the chance to choose from five different bonus features. Our favourite is probably the Magic Door, which rewards you with 5 free games and additional prizes. The Tornado Bonus is worth mentioning too as it triggers random prizes randomly.

Where’s the Gold is based around the theme of gold miners. The developer incorporated the following symbols: a shovel, an axe, a cart, dynamite, and the mine shaft. This game features five characters, namely Mary Money, Nugget Ned, Peter Panner, Prof. Gold and Happy Luck – all of them work in a gold mine. 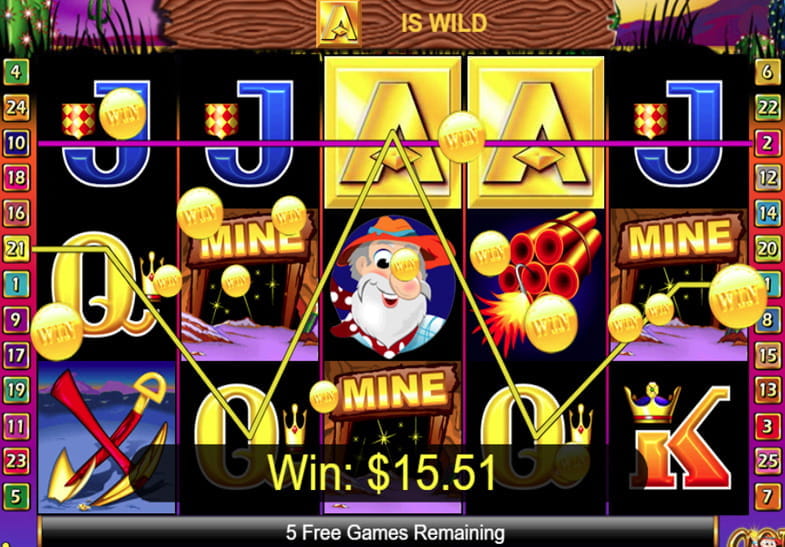 The free spins bonus allows you to win up to 20 free spins when three or more scatter symbols land on the reels. As soon as you trigger this feature, the miners line up on the screen, and you must select one to claim your prize. Remember that each character offers a different reward, so choose wisely.

At lucky number seven, we have Miss Kitty in our top 10 Aristocrat video slots. With deep dark green eyes and bright pink-purple hair, the whimsical cat will take over your heart. Miss Kitty is the wild symbol here, the scatter is the moon, and other symbols are household items like a box of milk or yarn balls. 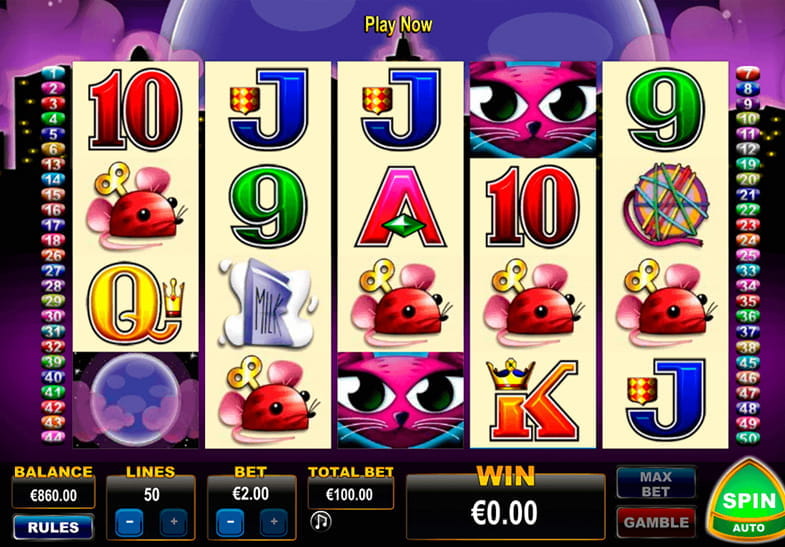 Win 10 free spins when three full moon scatters land on any of the reels. Oh, and here is a pro tip – you can re-trigger the feature one more time and get 5 extra free spins. In addition to that, each wild symbol that appears during the bonus round remains until the end of it.

Chinese heritage is the inspiration behind Aristocrat’s Lucky 88. In far eastern culture, the number eight symbolises luck and wealth. Moreover, symbols contribute to the theme. For instance, cranes stand for immortality and lion statues are often found in emperor palaces. Other Lucky 88 symbols include red packets, gold coins and paper lanterns. 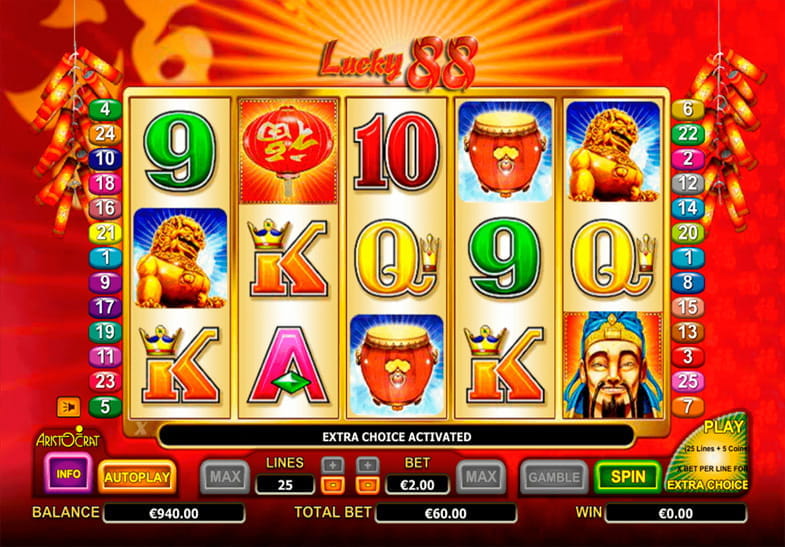 We highly recommend you turn on the ‘extra choice’ feature to get the most of your gambling experience. Bear in mind, this will increase the cost with 5 coins, and you must bet max lines. However, the bet equals to 5 credits plus the number of lines played, and the total amount is then multiplied by the bet per line.

Moving forward, we have another Oriental-themed slot by Aristocrat – Choy Sun Doa. Named after the God of Wealth, this game might bring great riches into your house. The far eastern theme is kept throughout the game with the symbols such as the Ghost Koi, the Golden Koi, the dragons, and the jade rings. 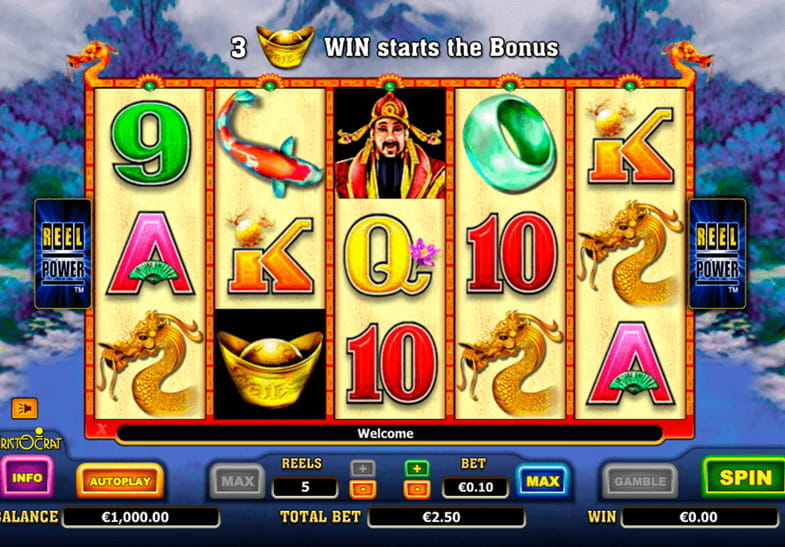 This Aristocrat online slot has a free games feature, which is triggered when 3+ scattered golden nuggets appear on the reels from left to the right. Then, you must click on the corresponding ‘fish’ to select one of the five bonuses. Also, during the free games, you could win random prizes if red packets land on any of the five reels.

Last in our top 10 list is the Big Ben slot, so let’s take a trip to the city of London. Probably, the most popular symbols of the megapolis are the Buckingham Palace guards, the Big Ben, the union jack, red double-decker buses and phone boxes. Thus, the developer added those among others as icons in the game. 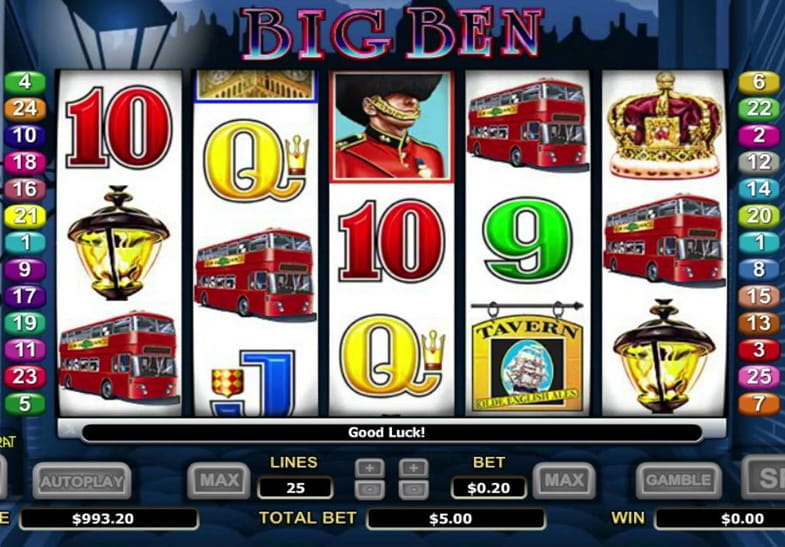 Our favourite is the Big Ben bonus round which is triggered when the Big Ben scatter appears on reels one to five. Your prize is determined by the number of chimes. Those who are lucky enough to hear the clock strike 12, get up to 400x their stake. If you want to play Aristocrat slots online but still wonder which, we suggest you check the complete list below as well as our guide about the best real money online slots.

The rapid development of consumer technology changes our behaviour. Consequently, software providers create not only real money but online slots demo play games that better suit us. Aristocrat has offered players exciting and innovative slots for over 65 years now. The developer still has cards up its sleeves, and there are surprises yet to be released.

The Aussie company never ceases to amaze us with its newest additions. Currently, Aristocrat is working on multiple innovative projects, but unfortunately, we only have the time to mention a couple. Another sequel of the world-famous TV show, The Walking Dead 3 is on its way in 2020, so is Zorro Wild Ride.

Here are the most popular new Aristocrat slots for 2022:

Established in 1953, Aristocrat is among the top software developers for bring-and-mortal and web-based casinos. The Aussie company specialises in software development for land-based casinos, unique systems and bonus options development, and video slots design. Also, Aristocrat created the following innovative features: Reel Power, Drag n Drop, and Cashman Tonight to stand out from the competition.

In this post, we took you on a journey around the whole world as well as back and forth in time. This shows you how diverse Aristocrat slots are. From Ancient Egypt to modern-day London, there is something for everyone. On top of that, you will find lots of interesting mobile features at the best casino apps for Android.

Allow us to take a second for the honourable mentions – Big Red, Let’s Go Fish’n, More Hearts and Gold. In case, you have found the slot you fancy but still wonder ‘Where can I play Aristocrat slots online’, we suggest you take a look at Klasino.

Like all good things, our interdimensional adventure around the globe has come to an end. However, to make sure you are not left with any queries, we have prepared this FAQ section. Here, you will find the top questions on the matter and the corresponding answer below each.

These are the top 10 Aristocrat slots in 2022 – Red Baron, Queen of the Nile II, Dragon Emperor, Werewolf Wild, Zorro, Where's the Gold, Miss Kitty, Lucky 88, Choy Sun Doa and Big Ben. The online adaptations of the best games offer quite good RTP from 94.75 to 97.00 per cent.

💰 Which of the top 10 Aristocrat video slots has the highest RTP?

With a return to player rate of 97%, Lucky 88 offers the biggest potential payouts from all the top 10 Aristocrat video slots. This game is inspired by Chinese culture. For instance, the number eight symbolises luck and wealth and having it twice in the name must be a good fortune.

🥇 Which is the best of Aristocrat online slots in 2022?

In this post, we looked at the top Aristocrat online slots and undoubtedly the best one is Red Baron. Based on the WWI hero, Manfred von Richthofen, the symbols in the game are era-appropriate. Also, the only bonus feature offers you a chance to multiply your stake if you guess correctly.

🎰 Where can I play Aristocrat slots online?

Now, that's the million-dollar question. At the moment, the top online casinos for Aristocrat games are the following Klasino, BetVictor, and Videoslots. However, in our opinion is best for you to read about each of their offers and terms and conditions before you sign up.

💻 What is the best casino to play Aristocrat slots online?

The newest and hottest casino to play Aristocrat slots online is Klasino. The operator has thought of everything you might need. Allow us to name a few of the perks at Klasino – games by top developers, VIP club, rewards, great promotions, among others.