If you’re looking for predictable reels covered in fruits, this slot isn’t for you. If, however, you’re bored with the usual games you’d find anywhere, give this instant classic by Playtech a chance – nowhere else will you have a cow thrown at you or have the chance to strike a knight, collect a shrubbery, and throw grenades at a killer rabbit. And all those will bring you cash prizes. Here is the essential info on this parody of the traditional King Arthur story: 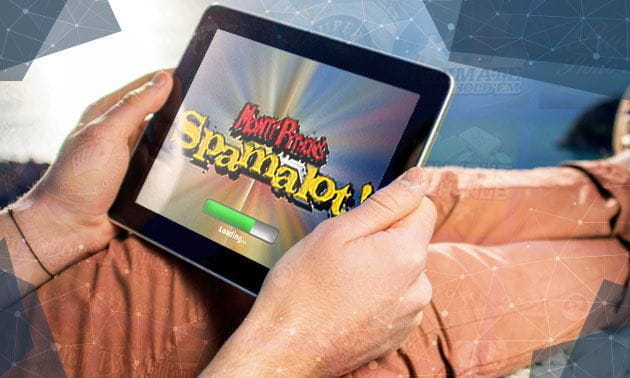 But that’s nearly not all! The game’s full of ridiculously fun features and activities for the players. We’ll actually guide you through the maze of rules by highlighting the most important things to remember. We’ll give you an overview of the symbols. Most importantly, we’ll give you the chance to try the game for free, in a handy demo version. So, read on as there’re plenty of useful tips in this review for you.

Now, trying a game with play money first before wagering your hard-earned cash is always a good idea. But that’s even truer when it comes to a game that is rather complicated like this one. Well, we’ve got the best news – you don’t have to risk a penny. Just click on the embedded game below and get acquainted with the symbols and the rules. Have as much fun as you like but do come back because we’ve got so much to share with you. 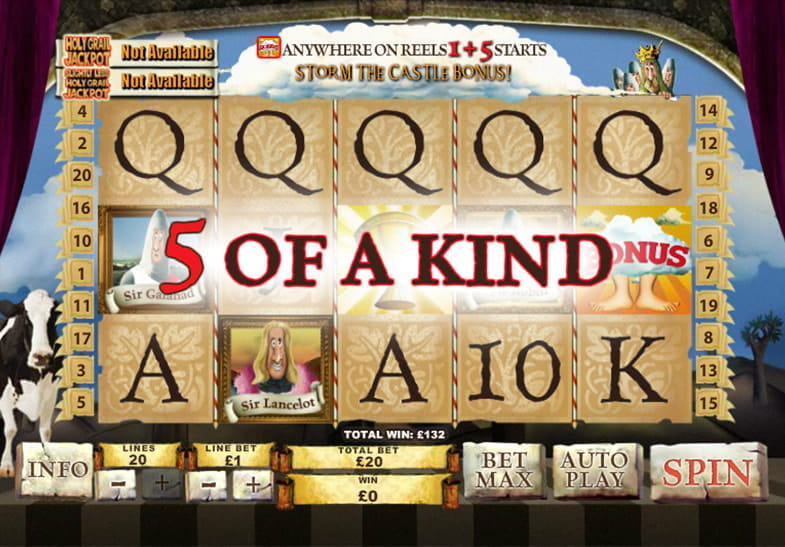 Did you enjoy yourself? I bet you did! This game has got so much to offer and it does have some very alluring features. Who doesn’t like having a good laugh, after all? But as much as we like a good time, we all like getting some regular wins as well. Well, you’ve probably noticed that this is a good slot for that, too, so why don’t you head over to Ladbrokes Casino – probably the greatest place for Playtech games – and start playing for real.

All about the Game

The year is 932 and you’re invited to a quest for the Holy Grail, which in this case is a Holy Jackpot. But even before you get to the coveted jackpot game, where you’ll play for not one but two jackpots, there are plenty of chances to have ridiculous fun and win lots of cash. This Playtech slot has 5 reels and 20 selectable paylines and is inspired by the 2005 Monty Python musical with the same name. There are two jackpots to try and win and a bonus game in four different settings. There are also Free Spins. We’ll tell you all about those but let’s first have a look at the symbols.

The Symbols and Their Payouts

The symbols are the characters you’re already familiar with from the musical. First, there’s King Arthur. Then, there’s Sir Lancelot – three of these guarantee you hearing his special song. You’ll also see the other knights, namely Sir Robin and Sir Galahad, and, finally, the Lady of the Lake. When part of a winning line, the Lady of the Lake loses her dress and remains in her corset. Sir Robin may not be as brave as Sir Lancelot but three of his symbols will start some awesome medieval music. The lower paying symbols are the usual cards – A, K, Q, J, and 10. The Holy Grail is Wild, substituting for almost all symbols. The game logo is a Scatter and there’s a Bonus symbol which can only appear on reels 1 and 5. 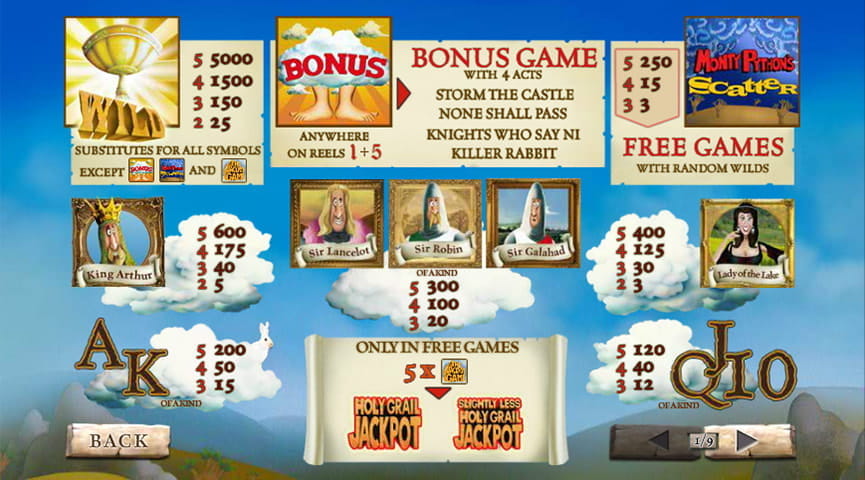 Considering the betting range, you’ll have quite a choice. Having in mind that you can wager as little as 1p and as much as £50 per single line, you can end up betting between £0.20 an £1000 per spin. Are you wondering whether there’s a jackpot? Actually, there’s not one but two jackpots – the Holy Grail Jackpot and the Slightly Less Holy Grail Jackpot. You’ll have to play the Jackpot Game in order to win one of those jackpots but you can only play it if you collect all 5 Jackpot Game symbols, which appear in the Free Games only.

The Bonus Rounds & Other Features

But the jackpot isn’t the only way you can make money. For example, there’s a Bonus Game with 4 settings. Land 2 Bonus symbols and you’ll be taken to the first one. It’s called ‘Storm the Castle’ and you’ll have to pick the safest spot for the group of knights as the Frenchmen throw cows at them from the castle tower. Continue playing the game and the next time you land 2 Bonus symbols you’ll be entered into the ‘None Shall Pass’ game. There you’ll have the chance to strike at the ridiculously brave knight. Hopefully, you’ll dismember him and pass through. The third episode of the bonus game is called ‘Knights Who Say NI’ and asks you to bring the knights a shrubbery. The final scenario – ‘Killer Rabbit’ – gives you a chance to destroy a rock hoping it would be where a bloodthirsty rabbit is hiding. However, be aware that the rabbit will eat a knight every time you miss it.

Apart from the four-story bonus game, there are free games – land three Scatter symbols anywhere on the reels and you’ll be awarded 10 Free Spins. Additionally, in this feature exclusively you’ll get random Wilds as a blue bird will sometimes fly over the reels and drop a bomb that will turn a random symbol Wild. It is also during the Free Games feature that you may get to play the Jackpot Game and have a go at the two jackpots. The bonus rounds and the free games come often enough both to entertain and to make your playing profitable.

Just as Fun on the Go

The mobile version of this awesome game was released in 2014 – that’s four years after the video slot was created. However, it’s pretty clear that true fans of the Monty Python humour would appreciate the opportunity to spin the reels and hunt after that juicy jackpot on the go. We must say that the mobile version works seamlessly on any Android and iOS device that we’ve tried and if you decide to play on the go, you’ll be up for just as much fun as when playing on a desktop computer.

You’ve probably gathered from the tone of this review that we approve of this tribute paid to the Monty Python musical even if the musical itself is an openly disrespectful parody of the Arthurian legend. The slot with all its settings and videos guarantee you quite a lot of fun. And the payouts will make sure you have even longer to play if not help create a massive fortune. Here are some other slots you might like to try:

Did you happen to be appalled by this insensitive slot? Are you wondering what Spamalot means and who those strange knights are? Are you eager to hear the whole songs? Well, you should probably look up Monty Python and read up on their specific type of humour. You’d also want to watch the film ‘Monty Python and the Holy Grail’ if you haven’t done so yet. By the way, the tune that plays every time you spin the reels throughout the base game is ‘Always Look on the Bright Side of Life’. You can hear it in its entirety during the Jackpot Game. If you love playing slots, we might have a page that will sparkle some interest in you. We have reviewed and talked a lot about the symbols in slots in it, so give it a check!