Read our Blazing Sevens slot review, where we will be delving deep into this ‘hot’ slot to discover the key features, entertainment value, payout frequency, the main theme, and the fabulous bonus game. There are 3 reels across ten individual rows, with ten possible paylines. There is potential for a maximum win of £21,000 in a single spin. It has an RTP of 95.00% with low volatility. You are able to play this slot for free or real money. 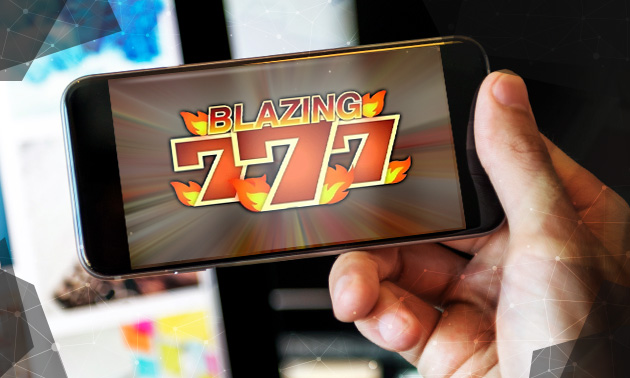 It can be a little nerve-racking to plunge your hard-earned cash into a slot game you may not know much about, so we have the solution, why not try Blazing Sevens online slot machine for free? This way, you can alter the stakes, check out the payout frequency, understand the gameplay and enjoy the excitement with no risk. 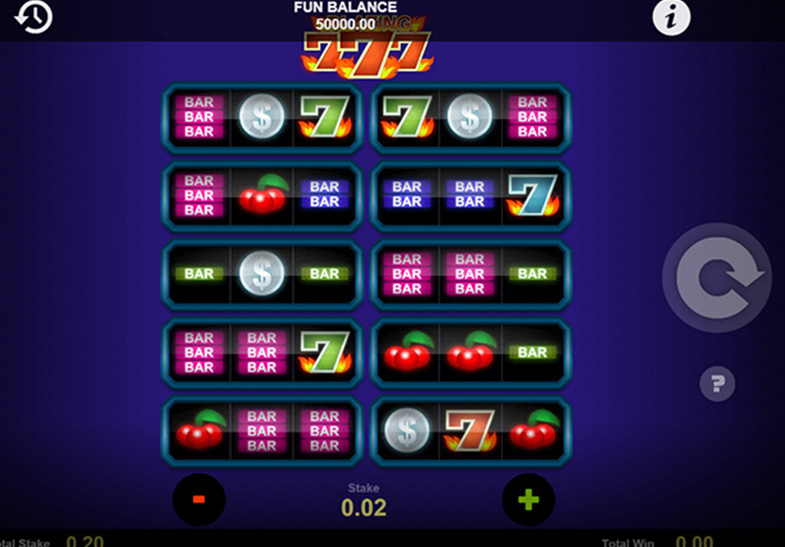 Now that you’ve enjoyed playing it in the demo version and got a real good feel for the game, why not play it for real money? We would recommend one of our real money Blazing Sevens casinos where you can play safely and could also bag a generous welcome bonus too.

Blazing Sevens slot has three reels with ten single rows, providing ten winlines. It is an old school, classic multislot with recognisable symbols such as cherries, 7’s, bars (single, double, triple) and dollars. The slot game has minimal instructions as it has a real simplicity in its gameplay.

There is no autoplay, quickplay, or adjustment tabs, except a sound mute and the only other icon apart from the (i) for help and (?) for the paytable, is one that lets you view your last 100 bets. When changing the stake value, you need to multiply it by 10 to see your total stake per game.

As there are 10 individual rows, you can potentially win up to ten jackpots. It’s all about matching symbols and especially certain coloured 7’s which will then bring you the bonus round with differing amounts of spins dependent on the colour of the 7’s which allowed you access to the bonus round.

Blazing Sevens slot RTP is 95.00%, which is a distinctly average percentage, considering slots range from 87% – 99%. The volatility is low until you hit the bonus round when it becomes more medium to high. You win by matching three symbols on any one game, with the potential of winning ten different prizes.

Hitting 7’s, which are ‘blazing’ enters you into the bonus round. It’s worth noting that the spins awarded for the bonus round are not free, and your stake will be deducted. You can’t win more than one set of blazing 7’s at any one time, and you can’t trigger more spins during the bonus round ‘Blazing Sevens’. 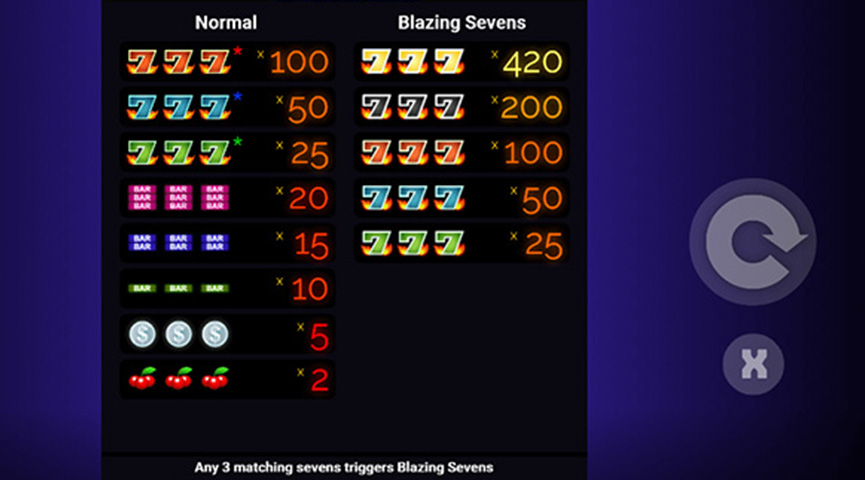 Blazing Sevens slot offers a stake value range of £0.02 to £5.00, which when multiplied by ten gives you the minimum bet per game of £0.20 to a maximum bet of £50. There are no progressive pots. However, there is a maximum potential win of £21,000 from a single spin.

Getting to the bonus round of Blazing Sevens does happen quite often, landing three sevens in the bonus round also occurs quite frequently. However, through our research, we found we were only able to land the lower value sevens such as green or blue, worth 25x and 50x, respectively.

Blazing Sevens is available for desktop, tablet and mobile across all the recognised operating systems, Apple, Android, Windows. The slot is fully optimised to adapt and play smoothly whatever the screen size and neither gameplay, graphics or sound effects are compromised when switching from the desktop to a mobile device.

The advantages of playing via a mobile or tablet device are moveability. Nobody likes to be rooted to the spot. That’s why to have Blazing Sevens accessible in the palm of your hand is a bonus. Take it to the beach, the coffee shop or on the train, practically anywhere!

I really enjoyed playing Blazing Sevens slot machine as it gave me that feel, good ‘old-school’ vibe, with the cherries, bars and sevens. I was impressed how many times I got through to the bonus round Blazing Sevens and am therefore surprised with the 95.00% RTP, as with the continuous small payouts I received, it felt more like a 97%+.

The music is rather jolly, and after a while, I did need to turn it down somewhat. The game itself presented no lagging issues, and there are upsides to playing. However, I feel that it may not be exciting enough for some, and the lack of free spins and possible wilds left me wanting more somehow.

For those who like this sort of classic themed slot, we would recommend Tom Horn Gaming’s Hot Blizzard, which gives a similar vibe by using the classic symbols fruit and sevens. For something a little different, you could try IGT’s Pharoah’s Fortune. You might also try some less known software developers like Multislot. And why not check out the best slot sites on our website too?

We’ve come to the end of our Blazing Sevens slot review and trust it has been helpful and informative. This 1×2 Gaming slot is a great classic with its’ quirky reels set up and old style symbols. The potential payout of 420x the stake is certainly inviting, along with the frequency of payouts.

We hope you’ve found the review informative and helpful. We understand that you may feel a little bamboozled with information overload and so we’ve popped some common questions below for you to browse and revisit certain sections of the review if necessary.

✅ Where can I play Blazing Sevens?

Blazing sevens can be played at most of the top casinos. As these casinos are top ranking, you can also expect to pick up some generous bonuses/promotions and have access to plenty more games and top notch software developers.

❓ What is the Blazing Sevens RTP rate?

The Blazing Sevens RTP rate is 95% which is an average rate considering slots range from 87% - 99%. When playing the game however, it actually feels like the percentage could be higher considering the frequency of payouts.

🎁 Does Blazing Sevens come with a special bonus round?

Blazing Sevens does indeed come with a bonus round. Match three 'blazing' sevens of a certain colour, and they will unlock the bonus round and a specific amount of spins. These spins are not free however and will be deducted from your stake. You can check out our website to find out more on the best online slots bonuses.

⭐ What are the best Blazing Sevens casinos?

One of our recommended Blazing Sevens casinos is PlayOJO. Our top casinos have been chosen for their key features which include, game selections, software developers, bonuses, promotions, fair gaming compliance, safety and security plus much more.

💻 What is the Blazing Sevens software developer?

Blazing Sevens is a product of 1x2 Gaming. This is evident in its simplicity of style, classic vibe and smooth gameplay. 1x2 Gaming is one of the industry's leading software developers and sits alongside neighbours like Elk Studios, Yggdrasil, iSoftBet, NetEnt and Red Tiger Gaming.

Check out our awesome variety of software reviews, followed by some of our recommended favourite slots! Discover the world of quality software developers out there.