Battle of the Gods Slot Review – Olympus Awaits You!

Playtech is one of the most popular iGaming studios in the online world, and with this slot, they take us on a trip to Ancient Greece, where you can witness the epic struggle between the Titans and their children. Read our Battle of the Gods slot review and learn all about its reel format, paylines, and exciting bonus rounds that can be quite rewarding. 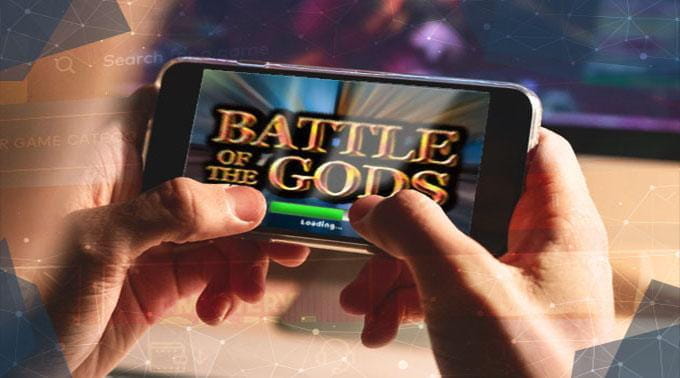 Play Battle of the Gods Here!

Best Battle of the Gods Sites for 2022

Play Battle of the Gods Slot Game for Free!

Before you read more about the technical details and the expected returns of the Battle of the Gods slot game, you should take a look at our demo game. The graphics and the overall feeling are important, so it is better to check out the game yourself and see whether you enjoy it. Just be careful and don’t use up all your luck – you will need it when you start playing for real money! 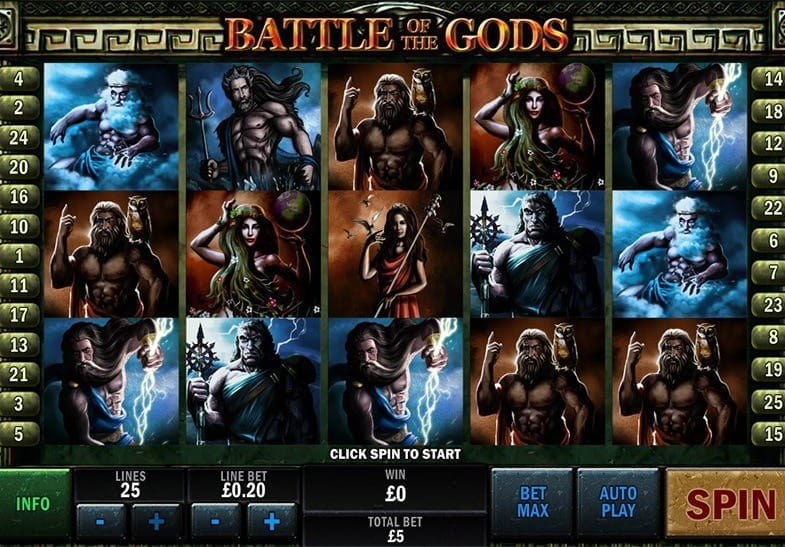 If you have enjoyed the demo version, then you should definitely try the real Battle of the Gods slot online. Slot games simply don’t work that well when you are not spinning for real money. We’d recommend you try the game at the Mansion Casino online. Out of our recommended casinos featuring this Playtech title, this is the highest-rated operator. It is ideal for high-rollers since they can be quite liberal with the maximum bet limits.

Battle of the Gods Slot Overview

The Battle of the Gods slot game takes place in Ancient Greece, at the time when the Titans would be toppled by their children, who would then go on to become Gods of Olympus. You get your usual 5-reel, 3-line format, with 25 paylines that can be individually selected. The interface would be well-familiar to fans of Playtech slots.

You have an auto-play option that allows you to set a betting limit and a pre-determined number of spins; you can also skip the spin animation by pushing a stop button, which allows faster playthroughs. The bonus here is some tasty free spins, but there is an interesting twist – more on that in a sec.

As already mentioned, the Battle of the Gods Slot has a mythological theme. However, many of the familiar Greek faces are absent, as Zeus and Poseidon are the most well-known gods taking part in this slot. You get Hestia and ancient Uranus, while on the side of the Titans, we can see Chronos, Atlas, Rea and other names that you would rarely meet outside of the Greek Literature class.

This slot doesn’t feature any generic symbols, so the reels can look a little overcrowded at times. You also have scatter and wild symbols, which give you bonus payouts in addition to their special effects. The wilds replace any other symbol in the paylines, while the scatters can trigger the bonus free spins. 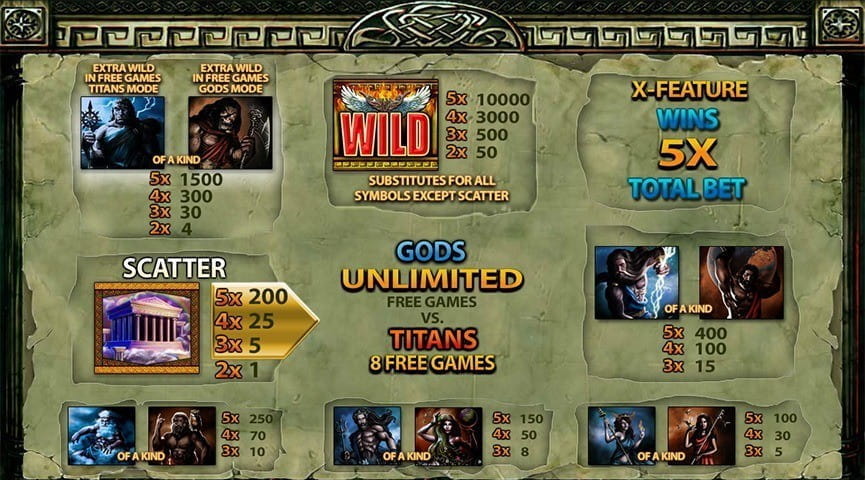 With 25 paylines, you have quite a flexible betting range here. You could go as low as 1 penny if you desire, while the maximum bet depends on the venue where you go to play. In some casinos, this slot would be ideal for high-rollers since the bet limit can reach £50 per line. The jackpot is worth 10,000x your total bet, but the true highlight is the free spin feature. If you manage to nab a lucky streak, the free spins could go on for quite a while.

Battle of the Gods Bonus Round Overview

The scatter symbols in this slot trigger the free spin mode of the Battle of the Gods slot game. You need to land three Scatters anywhere on the reels. Nothing unusual so far – but this game does offer you endless spins. This may sound implausible, but the free spins are launched in the aptly named God Mode.

During this stage, there is no limit to the number of free spins. Things only start to go bad when you land the Chronos symbol on the 3rd reel. The King of Ttans switches the bonus round to Titan mode – in Titan Mode, you only have 8 free spins in total, and they are cumulative.

The good news is that you could switch back to God Mode at any time if you land another Chronos symbol in the middle. This means that you can hope for very long free-spin streaks. The bonus round ends after the last Titan free spin has been played. When you have played through a total of 8 Titan mode free spins, you switch back to the main game.

As you may well know, waiting for a 3rd scatter is a hellish experience in any slot, so the bonus feature does not trigger as often as we would like, but the potential payoffs here are pretty high, so it’s more than worth it.

As most other Playtech slots, the Battle of the Gods slot is fully compatible with your phone. You can play it on the go from a mobile or a tablet. The interface has been remastered in the usual Playtech style, so the controls are perfect for a touchscreen. You still have all the options that the desktop version offers, so no problems there.

The performance is smooth and fast, and this gets one of the better grades for mobile compatibility. The only issue is that the cluttering problem we mentioned earlier is more pronounced on a smaller screen. Nevertheless, the experience is generally nice, and the transition from the big to the small screen is nicely done.

Battle of the Gods Reviewer Opinion

In my opinion, the Battle of the Gods slot online is a fine addition to the Playtech cannon. The game is optimised for mobile devices, and the bonus round can award up to 10,000x your stake. It isn’t the most innovative reel machine, but the mythological theme makes it fun to play.

Battle of the Gods Slot Verdict

The Battle of the Gods slot game is one of the better slots out there, but it has its flaws and comes a little short of what it could be. There is also some serious competition running a similar theme. Hot as Hades is a quirky Microgaming title that turns its attention to the most-ignored of Zeus’ brothers, Hades (who also made an excellent villain in the classic Hercules movie). IGT’s Golden Goddess, meanwhile, takes a more… genteel approach to matters.

Read Review
Age of the Gods

Of course, don’t let those shiny alternatives take the attention off Battle of the Gods. The game holds its own thanks to the bonus round, which can be very profitable and skews the RTP in our favour. Of course, you need a little bit of luck to take advantage out of it – but the same goes for any slot. The battle lines are drawn, and even if you are a Titan fan, you should hope that Chronos stays away during the Gods mode free spins!

Spare a couple of minutes to review the most frequently asked questions people have about the Battle of the Gods slot game. Our review has been created around them, so it could serve as a good recap of what you’ve read in the past paragraphs. The answers are short and to the point, making them the perfect summary.

1️⃣ Where can I play the Battle of the Gods slot?

As pointed out in the Battle of the Gods slot review, the game can be played at several high-profile and legitimate casino sites. By being developed by Playtech, the game is very desirable by many operators, and as a result, most popular venues feature it, the best of which have been highlighted here.

2️⃣ What is the Battle of the Gods slot RTP rate?

The RTP is an important decisive metric for many players. As highlighted in the Battle of the Gods summary, the popular Playtech-powered reel machine boasts an RTP of 94.04%. It's a decent number and one that promises a potentially significant return on your investment in the long term.

3️⃣ Does the Battle of the Gods slot game come with a special bonus round?

Fans of bonuses, rejoice. The game boasts a very decent Battle of the Gods bonus round. All you need to do to activate it is to land three Scatter symbols anywhere on the reels. The number of free spins you'll receive is not limited, and you should only avoid hitting the Cronos symbol because it will set a limit of eight spins.

4️⃣ What are the best Battle of the Gods slot casinos?

The list of available and best Battle of the Gods slot casinos contains a diverse group of operators, all of which have been established as some of the most riveting and encompassing digital gambling venues on the market. Choosing either of our recommended Battle of the Gods casino picks would be far from a mistake.

5️⃣ What is the Battle of the Gods slot game software developer?

We all have to thank Playtech for the Battle of the Gods slot RTP, visual appeal, and features, which players love so much. The company has poured considerable time and recourses into creating the mythological game. Bonus points go out for the slot game's mobile-friendliness and great optimisation.

If you are curious to know more about the gambling field, a particular game, or a pioneering software developer, make sure to give one of our other reviews a peek. Each one of them is thoroughly researched, detailed, and insightful.