American Dad is a 5 reel 40 pay line slot machine from Playtech and it’s based entirely on the American comedy show of the same name. The hugely popular American Dad animated series first aired in February 2005 and is currently still running and in its 15th season. This sitcom was created by Seth MacFarlane, Mike Barker and Matt Witzman for Fox and follows the life of Stan Smith – the CIA agent that is devoted to homeland security. His wife Francine, daughter Hayley and son Steve live with Steve and his goldfish Klaus and Roger the alien who escaped from area 51. As you can imagine, this video slot from Playtech is a comical creation that is full to the top of bonus features and big cash payouts. Bets range from 1p a win line to as much as £200 a spin, so high rollers are going to have a field day! The maximum win comes in the form of a multiplier – 750x your stake, which is decent enough for low staked and big bucks players. 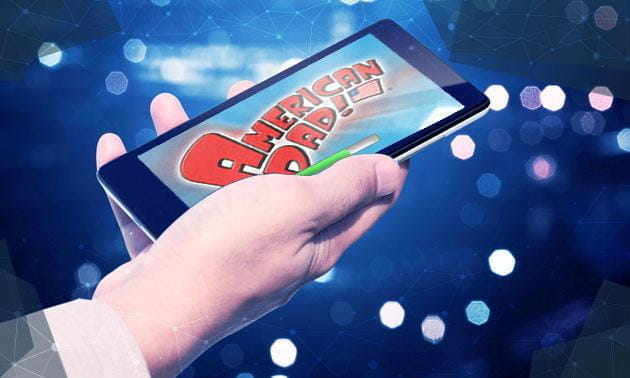 American Dad video slot is packed with fun-filled features that can be triggered on any spin, so knowing which symbols award which features is important. Below you will find details on every aspect of this online slot, from how to select the value of your bet to which bonus feature is the most rewarding.

There is a free to play demo version of American Dad and it’s as fun as playing with real cash, the only difference is you won’t actually keep what you win. Take time out to understand how the game plays before staking any cash, this will allow you to have a better understanding of how the reels work. Have a try of the demo below to see just how fun this American family can be. 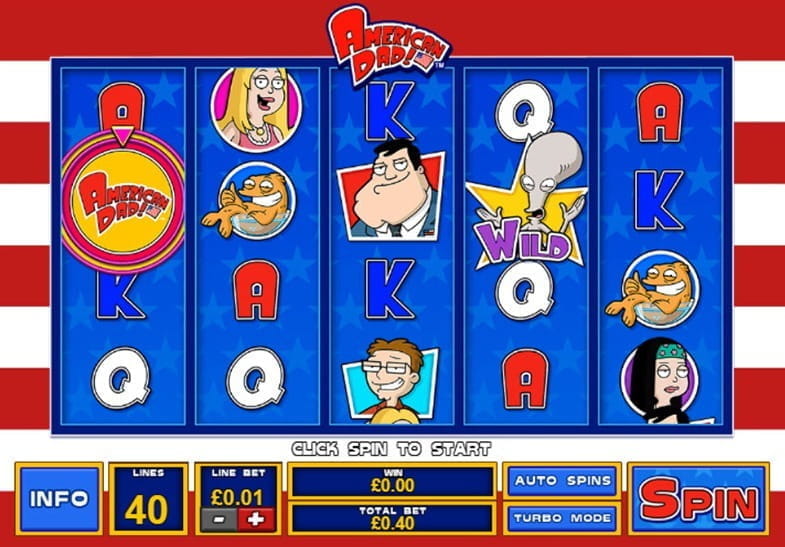 BGO Casino is home to Playtech’s American Dad slot, and hundreds of more slots and casino games to be precise. BGO Casino is one of the UK’s longest established and trusted brands, with plenty of games to suit even the fussiest of players. Sign up and claim up to 500 free spins which can really give you a flying start in the casino!

Overview of All Important Details

A patriotic American flag surrounds the reels of this game and there are no win lines shown, to keep things nice and uncluttered. Just like the television series, the characters and symbols on the reels are animated. Four symbols feature on each on the five reels and there is a control panel housed to the lower of the screen. A jolly theme tune plays out as you spin the reels and when a win is found, the symbols will almost come to life on the reels.

The whole dysfunctional family including the brainy goldfish and escaped alien Roger, can be found upon the reels, along with the game logo and card values of Q, K and A. The highest paying symbol is Roger (wild symbol), awarding a 750x multiplier when five of kind fall into place. Low-value symbols are of course the card values with a top multiplier of 40x, then you have the goldfish with a 50x multiplier and the socially awkward teenage son; Steve pays a 75x multiplier. Medium value symbols are Hayley who awards 100x your stake, Francine with a 150x multiplier and Stan with a 250x multiplier. The game logo is the scatter symbol and its features are being able to award the bonus game. 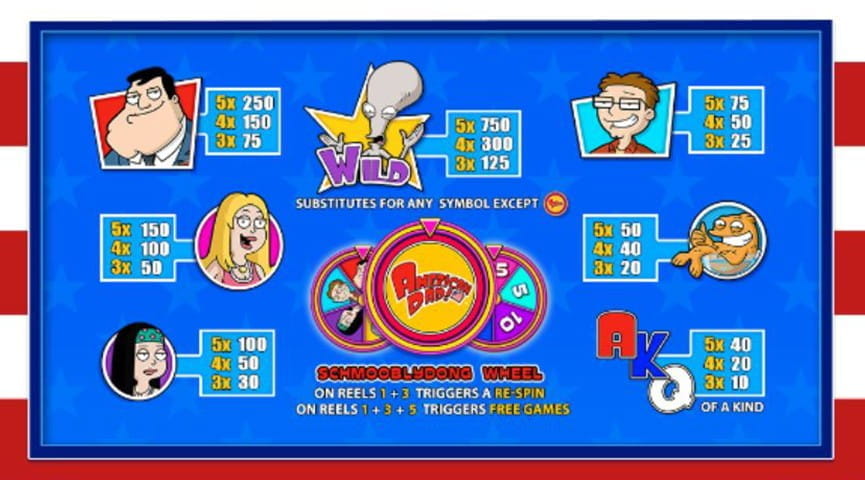 The win lines are fixed to 40 which means you need to have all 40 in play on every spin, but this shouldn’t be an issue, because you can adjust the value of the line bet to better reflect your budget. Use the adjuster arrows on the control panel to set your bet. Use the auto play feature to play up to 99 spins automatically. The turbo node button will force the reels to fall at a much faster rate.

The game logo (scatter) falling on reels 1 and 3 will trigger a free re-spin, but if the scatter appears on reels 1, 3 and 5, you will trigger the ‘Schmooblydong Wheel’, where three bonus wheels will appear. The first wheel determines which character’s feature you will play. The second reel powers up the feature in a different way and the third wheel awards the number of free games. The free spins bonuses that can be triggered are:

Stacking Stan: get stacked the American way! Additional stacks of Stan will be added to the reel strips below each existing Stan. The bonus wheel on reel 3 will determine how many Stans will be added per stack.

Roger’s Random Wilds: Roger is back from another wild night out! Roger vomits chunky random wild symbols on every feature spins. The number of wilds that will be added are determined by the bonus wheel on reel 3.

Hayley’s Progressive Multiplier: Get progressive with Hayler for some very liberal multipliers! Hayley collects signatures on every feature spin. Every signature she collects will increase your win multiplier. The bonus wheel on reel 3 will determine what the initial win multiplier will begin with.

Wheels and the Legman: The case of the wild path! The characters of wheels and the legman will chase across the reels, leaving a trail of wilds on every feature spin. As usual, the bonus wheel on reel 3 will determine the number of wilds added on the path.

Those scatter symbols are the key to unlocking very rewarding free spins features, so don’t be disappointed if they don’t appear too often. Having two fall into place is a little like being rewarded with a second chance at triggering the free spins features, but more often than not, the third doesn’t show its face.

American Dad slot on mobile is just as thrilling as the desktop version. The layout is identical but instead of having a bulky control panel with 3D buttons, you have a strip with your bankroll, paylines, bet adjuster and bet amount showing. To select your bet value, you simply click the arrow that’s partially hidden to the left of the reels. The top left menu houses the pay table and rules on how to play. Click the spin button for manually play or press and hold for auto play.

We have never sat and watched an episode of American Dad, but now we’ve played the slot, we think we just might! There’s fun and frolics on the reels, so you can imagine what the series is going to be like. Base game wins are frequent, however only small in value. To get the big cash, you will need to enter the free spins features and we have been lucky enough to try all five and can quite honestly say that none are more rewarding than the others.

Wheels and the Legman free spins can dish out as many as 10 wilds on every spin and should this happen, you know you’re inline for a grand win. Same goes for Francine and the Holy Grail, if you’re awarded just five fish – that’s all five reels covered, but then you need Francine to fall and if she does- boom, another big win! There’s certainly big winning potential with this online slot, so don’t expect to get those free spins on regular occasions, because you’ll be greatly disappointed.