Risk, Debts and Gambling – The Side of Churchill You Didn’t Know About

Author: Benjamin Webb
There are many famous people that are well-known for their gambling addictions, however, there is one person, whose life has been marked by his love of takings risks. Winston Churchill is truly one of the worst gamblers in history and has at certain points accumulated millions of pounds in debts. If you'd like to learn more about the British Bulldog's problem gambling, then this article is just for you!
Share on Pinterest

Winston Churchill’s wife had two major worries regarding the wellbeing of her husband – one was his drinking problem and the other was his degrading love of gambling. And whilst the first has been exceptionally well documented, the same cannot be said about the latter. It was only in recent years that academics and investigative journalists alike have started to dig deeper into that side of Britain’s favourite Prime Minister, which not many people know about.

Titles like the listed above are truly great reads and do a great job of utilising all available sources such as his personal letters, diary, books and even his tax records to paint a better picture of his constant struggle for money. However, we all know that most you could hardly find the time to go through such heavy reads, so we would try to compile all the essential information in the following article.

Winston Leonard Spencer-Churchill was born in 1874 in the glorious Blenheim Estate in Oxfordshire. The grandson of John Spencer-Churchill, the 7th Duke of Marlborough, he was raised in an aristocratic environment and from a very early age had manifested his love for the finer things in life. According to his mother, at the age of 13, he was spending excessive amounts of money, more than what an average family of six or seven had to live with. And whilst he had the spending habits and practices of a duke, due to hereditary reasons he lacked the land and title to afford such wastefulness. His financial situation worsened after the death of his father Lord Randolph Churchill in 1895. Four years later, in a letter to his brother Jack Churchill, he referred to money as the only thing that worries him in life. That may not sound all that strange to you. However, it is quite a thing coming from a decorated cavalry officer who was at the time serving in the bloody small wars in Cuba, India and Sudan. His army wage together with his writing in the role of a war corresponded earned him the equivalent of well over £100,000 a year in today’s money. However, that wasn’t even close to the funds he needed to support the lifestyle he liked. 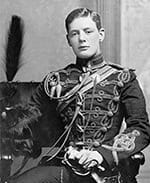 Winston Churchill’s early years set out the foundations for the way in which he lived his life until his death in 1965. More than 40 years of a steady rise in the political scene of Great Britain went hand-in-hand with his ever-increasing debts. He was heavily involved in all risk-related activities. From casino gambling and horse betting to trading on the stock exchange and even taking on bets that would see him sober for a whole year. The qualities that helped him lead his country in the darkest days of the Blitz saw Britain’s favourite PM at the verge of bankruptcy. Because it is virtually impossible to cover all his gambling mishaps, we are simply going to mention the one we believe is the most interesting.

The British Bulldog at the Hotel de Paris Casino

The most well-known story of them all resolves around Churchill’s affection for the South of France. Throughout the years he had become a regular visitor of the French Riviera. However, there was one place that he truly loved – Monaco. Whenever he was not fulfilling his ministerial duties, Churchill could often be found at the Hotel de Paris in Monte-Carlo. It is there that he racked up one of the highest debts in his gambling ‘career’. The story tells that one night in late August 1939, while enjoying his summer vacation away from the busyness of London, Churchill paid the Hotel de Paris’ Casino yet another visit. Like on most other occasions, his luck was nowhere to be found and he started losing tremendous amounts of money. His losing streak continued well into the early hours of the morning so much so that the director of the casino turned towards Churchill and suggested that it is time for him to stop. Unsurprisingly, the British Bulldog wasn’t about to let go and continued wagering, simply saying that he will pay the house in the morning. This moment never came, however, as he was rushed back to Britain, due to the increasing possibility of an outbreak of war in Europe.

After the end of the Second World War, for the surprise of everyone voters chose Anthony Eden to be their new Prime Minister, which left Churchill with a lot of free time on his hands. The enormous dividends that he was paid for the rights over his war diaries and personal biography paid off all of his depths and then some. In that very moment, he was invited to take part in the opening of the Hotel de Paris’ wine cellar, which was sealed during the war in fear that the German invaders were going to loot the venue’s vast collection of exquisite drinks. Considering his love for alcohol, Monaco and gambling he naturally agreed. Once the official ceremony was over, Churchill headed straight to the casino room through the network of small tunnels that he knew so well from his visits before the Second World War. As he kept gambling, his luck had abandoned him once again. As he kept on loosing throughout the night, the director of the casino approached him, just like he did 6 years earlier in the last days of August 1939. This time, however, Churchill said:

This time I’ll pay my debts… How much do I owe you?

So, after the director whispered a number in his ear, Winston Churchill took his cheque book out of his pocket and wrote one down for of 1,300,000 Francs, which was the total amount of his dept, both before and after the war. That check, however, was never cashed in as a sign of gratitude towards Churchill’s role in World War Two and is still kept at the casino. Furthermore, after his death in 1965, the Hotel de Paris renamed the apartment where the British Prime Minister had always stayed to the Churchill suit in order to pay respects to the man who played a big role in the history of Monaco as well as the history of the whole world. Unfortunately, there is no Churchill themed video slot at the moment that we can recommend to you in case you felt inspired by the amazing story of Britain’s beloved prime minister. The next best thing, however, is the All British Casino, which has really managed to capture this stiff upper lip, never give up frame of mind that is so well accosted with Winston Churchill’s character in particular and the British people in general. So, give our review a read, follow the link that we’ve provided, claim your bonuses and start winning today or check which are the rest of the best gambling sites UK can enjoy!