Author: Benjamin Webb
In the first half of the 20th century, the mafia had everything you could ever want and then some. When jobs dried up during the Great Depression, you could always get a decent employment at your local crime boss roughing up ruffians. When the Prohibition hit, all you had to do to get a drink was visit a pub operated by Al Capone. So with that in mind, is it truly surprising to think that it was the mafia who revolutionized American gambling as we know it?
Share on Pinterest 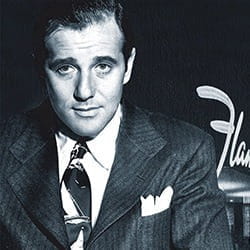 How A Mafioso Built Las Vegas

It’s not uncommon for people to underestimate just how powerful and influential the mafia has been in America throughout its history. They’ve bankrolled anything from banks and bars to even comic books. No, that’s not a joke – Marvel Comics, in particular, was funded by a mob, which is why they needed to refer to any criminal organisations within their comics as ‘The Maggia’, to avoid inciting the ire of the mafiosos. With so many connections spread throughout basically every aspect of American culture, how shocking would it be to learn that the mafia not only had their fingers all over the gambling pie but also baked it in the first place?

The handsome young man in the picture above is Bugsy Siegel, largely regarded as the father of Las Vegas. It may be hard to believe, but his origin is about as humble as it can possibly be. Born in 1906 to Jewish immigrants, Benjamin Siegel knew nothing but poverty. To make ends meet, at the tender age of 14 he started his first gang, engaging in a protection racket where he threatened shopping-stand owners into paying him protection money, or lose their stands. His gang’s fast growth earned him the nickname Bugsy (meaning ‘fast as a bedbug’), as well as the attention of numerous famous Las Vegas mobsters who began employing him for anything from business transactions to assassinations. Bugsy became rich beyond measure, to the point where he began hanging out with various Hollywood celebrities.

But no matter how rich he got, Bugsy’s appetite was insatiable. He semi-retired from crime in the 1940s, deciding to instead pursue real estate and construction work. Why? Because Bugsy smelled an opportunity, and, true to his nickname, wanted to be the first to seize it. In 1931, the state of Nevada officially legalised gambling, seeking to secure another source of revenue from casinos and resorts in the area. By that point, American mafiosos often went to Havana to gamble, so the presence of a high-end casino resort on domestic soil was in their best interest, especially if it could generate revenue. As such, numerous crime families tasked Bugsy with finding an appropriate spot in Nevada where such a resort could be feasibly built. He ultimately chose Las Vegas, which seems like the obvious choice today, but at the time the city was less of a bustling nightlife metropolis and more like something you’d see in a bad Wild West TV show.

Which, honestly, suited Bugsy just fine. A smaller, quieter town was going to be far cheaper to build in than a place that’s already full of similar venues, and once the construction was done, the resort’s popularity could easily attract tourism to the city. As such, the man set out to work on The Flamingo – a giant hotel resort that would feature a state of the art casino and gambling room. The original budget that mafia allocated for The Flamingo’s construction was $1.5m (about £14m in today’s money), but the final price tag upon the resort’s opening ended up being four times that amount, at around $6m (£58m in today’s money). Why? Well, because Bugsy wasn’t an idiot. He knew this would be his big break and wasn’t about to let it go to waste. So he ridiculously overcharged his investors, skimming the cash and getting out of this richer than he ever dreamed. Alas, his riches wouldn’t get him far, as in the moment the mafia realised what he’d done they put a bullet in his head. But hey, at least the Flamingo Resort turned out nice!

With Bugsy dead, the Mafia needed a new representative to operate The Flamingo and turn it into the success it was meant to be. They settled on Meyer Lansky, a close friend of Bugsy’s back from when he was still a street-level gangster… And ironically enough, it’s extremely likely that it was Lansky himself who ordered the hit on him. Picking up right where Bugsy left off (as in, assuming operations literally within 20 minutes of the fatal shot being fired), Lansky put everything he had into The Flamingo, attempting to fulfil Bugsy’s dream of turning Las Vegas into THE casino spot in the US. Fortunately, The Flamingo turned out to be a great success, quickly turning into one of the mafia’s primary money maker. It also helped that in 1959 Fidel Castro officially banned gambling in Cuba, completely destroying the gambling havens that the mafia was enjoying in Havana and pretty much forcing them to play in Vegas. Gradually, that income proved to be enough to fund numerous more resorts in the city which, much like the Flamingo, remain to this very day, such as the Riviera and the Stardust. And the rest, as they say, is history.

In the America, it’s very safe to say that gambling – or at the very least Las Vegas – would not have existed at all in its present form if it wasn’t for the mafia, and specifically the efforts of Bugsy and Lansky. While it’s not known exactly how much control the mafia has over Vegas presently, if any, it’s factual that modern gambling overseas was built with dirty money, for better or for worse. Moral implications aside, though, the tale of Las Vegas’ rise is a thoroughly fascinating one that’s most certainly worthy of a movie. It’s interesting to think just how many casino resorts internationally were built by international crime. Who knows, perhaps one day when you go to play blackjack at some kind of resort, you might end up sitting next to a well-dressed gentleman who keeps giving you scary looks whenever you win big… According to rumours, though, mafia are not big on roulettes so maybe this is where you have to aim. Or… you can always choose the safest way – pick one of the top slot sites from our list and gamble from the comfort of your home without the risk to meet these scary people that we talked about.