Author: Benjamin Webb
In a previous post, we introduced you to some of the most successful and insanely rich gamblers who have managed to bring the house down using mathematics, sophisticated software, and the theory of probability. But today, we’re at the other side of the spectrum – the dark and murky mystical side of gambling superstitions where weird rituals and irrational beliefs prevail in the battle with the house while the outcome of the game hangs in the balance. After all, why bother with common sense and skill when you can don red panties, hang the remnants of a mutilated rabbit around your neck, sprinkle some herbs, and chant a good-luck spell? Because screw logic, that’s why. Anyway, here are some of the most popular superstitions – from the funny and bizarre to the truly shut-the-front-door ones.
Share on Pinterest

Why are Gamblers Superstitious in the First Place? 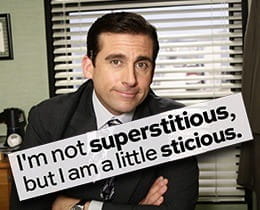 Well, because casino games, especially roulette, dice, and slots involve a lot of chance. With no real strategy, method, or any other failsafe system to guarantee a win, what can you do but turn to some unconventional methods? After all, superstitions are intrinsic to human culture – they’ve been ingrained in the human mind for as long as we’ve been a self-aware species. Long before organised religions, there were sacred rituals and spells and although we’ve toned it down a bit from sacrificing virgins to knocking on wood, according to a survey, 54% of all people have admitted being superstitious. Call it selective memory loss, irrational behaviour, or a regress in mindset, but it still influences gamblers’ actions.

When we discussed gambling psychology, we touched on the gambler’s fallacy – an erroneous motivator in the gambling thinking that asserts a non-existent reciprocation between a series of the same result and an upcoming series of the opposite one. This one is very common in roulette, as players keep betting on the same colour, thinking that after a certain number of successive red or even results, a series of black or odd numbers is just waiting to happen. That’s a blatant misinterpreting of the theory of probability considering the random mechanisms of chance-based games like slots, roulette, and dice. How about the percentage of chance when playing at online lotto sites or the best betting casino sites? Seek and you shall find out! Well, in roulette, previous outcomes do not in any way influence the next ones, so the chance of getting red again after a series of red outcomes is still 50:50.

This is exactly what mathematician Stanislaw Ulam proved in 1946 when he designed the so-called “Monte Carlo Method.” Using the random results in casino games, Ulam was able to develop a theory which proved that there’s no correlation between the outcomes, showing that even when the ball has landed on black dozens of spins, in the next spin it is just as likely to land on black again with no rhyme or reason. If you are interested in learning more about the gambler’s fallacy check our dedicated article.

Lucky in Gambling – Unlucky in Love

Now, we don’t really know what to say about this without insulting or triggering someone – after all, publishing an article online in 2017 is walking on thin ice, so we looked at some of the most successful gamblers trying to establish a connection but the results of our admittedly botched research were inconclusive – for example the inventor of card counting Edward E. Thorp who made hundreds of millions had a happy marriage that lasted more than 50 years, billionaire Bill Benter also has a loving wife and child, and then there’s Dan Bilzerian whose romantic spells include kicking models at night clubs and throwing porn stars off roofs, so we leave this open for interpretations.

Many a gambler perform a lucky ritual before or during a game or hold dear some kind of a lucky charm to which they have assigned the arduous task of working against the science of reasoning in order to influence the completely random outcome of a chance-based game. Yeah, don’t roll your eyes as if you don’t rub that peregrine talon before every bet. Who doesn’t, after all?

But it’s not good enough to just gear yourself with good luck paraphernalia and shout numbers out loud. You also need to be well-versed in the superstitious gamblers’ etiquette when it comes to keeping bad luck at bay. Here are some of the things that are considered to be bad omens at the casino table: 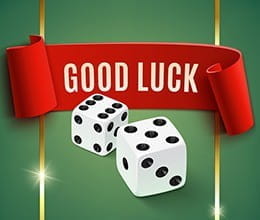 Gambling superstitions are just as widespread as they are in all other areas of life, varying from culture to culture, and some can be extremely personal. Certain charms and rituals can have opposite meanings across nations and ethnicities, so the least we can do is be respectful towards each other’s quirks. People have different ways of materialising their wishful thinking and concerns and while for some players common sense and logic are prevalent, others will ascribe immense significance to things that may seem downright ridiculous. But hey, we celebrate diversity and sure had a lot of fun compiling this list for you. Now, where did that rabbit hop off to… Just kidding. Seriously, PETA, we really are kidding.