The Greatest Gambling Scandals in History

Author: Benjamin Webb
Gambling is a serious business. People have been betting for more than four millennia, entrusting their money to the whims of Fate. As you know, nowadays you can wager on almost anything – casino games, sport matches, online tournaments, and even who the next Pope will be. However, there is one thing in common between all gambles – you need to believe that you have a chance for victory. But what if… you actually didn’t? How would you feel if the game was rigged, its outcome decided from the very start? This is one of the greatest sins in gambling, and it tends to leave people rather angry. Allow us to walk you through some of the grand gambling scandals that astonished the public, and left their trace in history.
Share on Pinterest 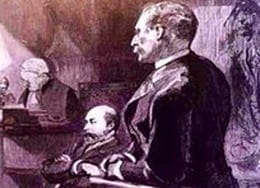 Back in the 1890s, London high society was left scandalised by a court case involving the heir apparent, Prince Edward – who would later go on to become King Edward VII. One of the close friends of the Prince, decorated war-hero Sir William Gordon-Cumming, had been accused of cheating and filed a writ for slander in response. The Prince himself had to attend as a witness, the first such occasion since 1411. People were literally buying tickets to see the historical event, and the Royal Court of Justice felt like a theatre. With the media out in strength, it seemed that the whole of England was watching. And all of this – over a game of baccarat.

One year earlier, Sir William had joined his friend the Prince at a social gathering in Tranby Croft, home of prominent shipping magnate Arthur Wilson and his family. After two nights of baccarat, he had won a significant sum, but several players confronted him directly about bending the rules. It seemed that the crafty soldier had been adding chips to his stake after the cards were revealed, thus making his winnings larger. Naturally, he denied the accusations vehemently, but in the end had to pledge to never play cards again in order to avoid public scandal. In high society, your reputation could make or break you – and cheating in any way was a grave sin. Naturally, when rumours of the ‘Tranby Croft affair’ were leaked to the public, Sir William took to court to defend his honour. After a very controversial case worthy of a Game of Thrones episode, he failed. Publicly disgraced, he was dismissed from military service and ended up ostracised by London society – though his rich young American fiancée stuck by him, so not all was bad.

“He has committed a mortal offence. Society can know him no more.” The Times

What was truly scandalising at the time was the fact that the game had been suggested and organised by Prince Edward himself. Baccarat might be one of the most popular casino tables nowadays, but it was frowned upon in Victorian England. It was considered a game of chance rather than skill, and even worse – there were rumours that it was popular in France. Baccarat had been banned when played for money, but this did not stop it from becoming the favourite hobby of many nobles, including the Prince. The general public was left shocked by the glimpse into the lives of the elite, and it would be some time before Prince Edward restored his reputation. At the very least – he had to switch from baccarat to whist.

The Black Sox of Chicago 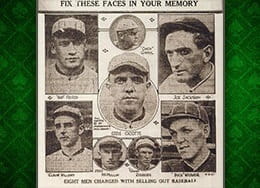 Sport has always offered a field of honour for men and women to measure their strength, but allegations of corruption have put a stain on many great athletes. Of course, betting is heavily involved in the issue, as sports gambling is a favourite past-time for many fans. In the USA, one of the greatest sporting scandals ever took place in 1919, during the baseball World Series finals. Back then, one of the strongest baseball clubs in the country was the Chicago White Sox. Having had a spectacular season, they were considered heavy favourites against their challengers, the Cincinnati Reds – but went on to lose over the course of 8 games.

It turned out that eight of the White Sox players had conspired together to throw the finals, and make a hefty profit in the process. Notorious Chicago gangster Arnold Rothstein was also involved in the fix. The flood of bets on the Cincinnati Reds right before the first match stirred up the gambling community, and rumours of what was about to happen even reached some of the news correspondents. Naturally, the following baseball season was plagued by suspicion, and a grand jury was assembled to investigate the matter. Pitcher Eddie ‘Knuckles’ Cicotte was the first to confess, and soon the match-fixing was unravelled.

Nobody got in jail for this spectacular defrauding, but the eight ‘Black Sox’ were permanently banned from baseball, and forever denied entry into the Hall of Fame. Judge Kenesaw Mountain Landis would become the first-ever Commissioner of baseball, with the task of clearing up the sport. The Black Sox incident has been deeply engraved into American culture ever since, having several books and movies dedicated to the subject, and even earning a mention in the second part of ‘The Godfather’. 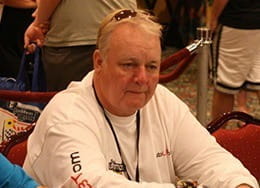 The chubby fellow on the right is Russ Hamilton, one of the great American poker players. Once upon a time in 1994, he was able to win the World Series of Poker main event, pocketing $1 million and his body weight in silver! However, he would ultimately go from hero to zero. Hamilton moved into the growing world of online poker, and became a consultant at UltimateBet, one of the biggest internet cardrooms. He was doing more than OK in his new job, attracting prominent poker players as spokespeople, and bringing the popularity of the platform to an all-time high…

But there was a slight problem. Some of the members began to file complaints about encountering a ‘superuser’. One of the biggest nightmares of any poker player is that his opponent will somehow be able to see his cards – and the superuser seemed to be doing just that. After some of the data was leaked, a prominent math expert supported this allegation. The ‘superuser’ seemed to be playing unbelievingly well, bluffing when his opponent was weak, and folding when he was strong.

“I did take this money and I’m not trying to make it right, so we’ve got to get that out of the way real quick ” Russ Hamilton

In 2008, it was revealed that some of the employees, led by former champ Russ Hamilton, had quietly been robbing their clients. Russ himself had over 4 accounts which allowed him to participate in games as if he was in ‘God mode’. He really saw all, much like Big Brother. With the cooperation of the former owners, he had managed to pocket over $20 million between 2004 and 2008, and had even been taped by one of his co-conspirators admitting to that. Since then, the court cases have been dragging for almost a decade now, with the platform taken down a long time ago, and large reparations paid to some of the cheated players. The only bright side of the whole fiasco was that it led to increased awareness of the potential problems in online gambling, and the stricter regulations that we have today. 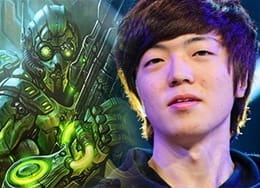 Have you ever heard about eSports? This stands short for ‘electronic sports’ – one of the new, and growing, fields of online betting. Electronic sports involve people beating each other at computer games, and the tournaments have been getting bigger and more prominent in recent years, especially in Asia. This appears to be a growing fad among millennials, so expect to hear more and more about it over the coming years. Dota II, Counter-Strike: GO, Starcraft II and Hearthstone are games with huge fanbases that run global tournaments offering large prize-pools. There are already arenas opening in Las Vegas.

Sadly, eSports have not managed to stay scandal-free. Quite recently, several prominent South Korean players were arrested by local authorities with allegations of match-fixing and intentionally throwing away matches. Lee ‘Life’ Seung Hyun was accused of having pocketed over 70,000,000 won (about $60,000) back in 2015, while Bung ‘Bbyong’ Woo Yong was paid the equivalent of $23,000 in January 2016. These sums may seem paltry, but in terms of eSports, this incident is not dissimilar to what the Black Sox were for American baseball. Eight people have been arrested, and they will spend time in prison. However, the worst part is that ‘Life’ was one of the faces of competitive gaming, and only 19 years old to boot.

This incident comes soon after the huge Counter-Strike: GO scandal in the USA, so a darker side of eSports is gradually getting revealed. There have been long-running concerns about overworking players in South Korea, where competitive gaming is gradually turning into a full-fledged industry. The growing hope is that instead of marring this new sport field, the accident will serve as a wake-up call, and lead to more integrity in the long-term future. After all, this is the true reason behind exposing gambling scandals – the drive to set things right. Eh, let’s face it, who doesn’t like sports betting after all.

View All Posts
Check Our Hottest Offers For January 2023
Winstar Social Casino
6x (500%) More Chips on 1st Purchase
Claim Offer
Gambling Guides
Popular Articles
Beginner Guides
Recommended Casino Sites
What Is Your Favourite Casino Game?
Submit
Results
Open Special Offers
Winstar Social Casino
6x (500%) More Chips on 1st Purchase
Claim Bonus
18+ Winstar Social Casino does not offer “real money gambling” or an opportunity to win real money or prizes. It is intended for an adult audience and entertainment purposes only. Due to this app’s authentic nature, all users are required to be 18 years or older to play. By downloading the app, you agree you are at least 18 years old and comply with all local laws pertaining to social gaming. Practice or success at social casino gambling does not imply future success at “real money gambling".