Author: Benjamin Webb
Alex Rider: Russian Roulette is the tenth novel in the Alex Rider series, which were written by a famous British author, Anthony Horowitz. Published in 2013, the novel is a prequel to the series and focuses mainly on the childhood story of the assassin, Yassen Gregorovich, who appears in most of the books.
Share on Pinterest

The Plot of Russian Roulette

We would like to warn you that there might be some spoilers in this article regarding the book or the series. We will do our best not to dive into details or ruin the experience of reading the book for yourself. As mentioned earlier, the book Russian Roulette is mainly covering the backstory and childhood of the famous assassin, Yassen Gregorovich. That name is considered legendary among the fans of the Alex Rider series due to the impact his persona leaves on the reader. His presence is rarely seen in the books and only for short periods of time, but the impression that is left in his wake is memorable. Russian Roulette can be considered as a filler book, which introduces the reader to the backstory of a character and explores a different timeline in the world of Alex Rider.

Russian Roulette is about the childhood of an international contract killer, whose target is a fourteen-year-old spy, named Alex Rider. Yassen was an ordinary boy who grew up in rural Russia, but life turned for the worst. His careless days and simple life were abruptly interrupted by an anthrax explosion and a government cover-up. The young Gregorobich embarked on a dangerous path that will ultimately lead him to become a hired assassin. He became a part of Moscow’s criminal youth working for the most ruthless crime lord until finally falling into the hands of Scorpia. They trained him into a skilled assassin, even though he resists to become a killer. Everything changes completely due to an encounter with someone very close to the young spy, Alex Rider.

Overview of The Alex Rider Series

After talking about the 10th book, we would like to give you a short introduction into the series itself. Written by Anthony Horowitz, the Alex Rider series are spy novels about a teenage spy. The target audience for the books is primarily teens and young adults. The series is made up of eleven novels, five graphic novels, three short stories and a supplementary book. Alex Rider, who is a teenage boy at the age of 14 gets trained and hired by the organisation MI:6. The main protagonist is sent to a series of dangerous and action-packed missions, filled with near-death experiences. The series uses a great mix of danger, humour, cleverness and a well-placed dark scenes and moments. The writing style is easy to read, making consumption of the novels enjoyable and not straining on the readers from the target audience.

All locations mentioned in the books are completely real, which the writer, Mr Horowitz thoroughly researched and even visited, in order to get a better feeling of their atmosphere. The gadgets and technology used as part of Alex Rider’s arsenal are a work of genius, making them easily relatable, such as a Gameboy hand-held device, modified to be a hand grenade.

Anthony Horowitz is an English novelist and screenwriter born in Stanmore, Middlesex. He grew up into a Jewish family and enjoyed reading books from a very young age. His father had an amazing library, which started Horowitz’s passion and hunger for stories. At the age of 8, he was sent to Orley Farm in Harrow, Middlesex. There, he was in a boarding preparatory school, where the boy entertained his peers by telling them about the stories he had read. At the age of 13, he went to Rugby School in Rugby, Warwickshire. Anthony’s mother introduced him to Frankestein and Dracula, as well as gifting him a human skull for his 13th birthday. The now young adult already knew that he wanted to become a writer as he realised early that the only way, he can be happy is by writing. He graduated from the University of York with a second-class degree in English Literature and Art History in 1977.

What is Russian Roulette?

The term Russian roulette emerged from the Russian army back in the 1900s. It is a deadly game of chance, where a single bullet is inserted into a revolver with a cylinder. It is then spun and snapped back into the gun and the muzzle is placed on the player’s head and the trigger pulled. A six-chamber weapon was the usual choice, meaning that there was a 1 in 6 chance for the player to lose his life. If you would like to find out more about the history of this deadly game, then you can check out our Russian Roulette history article.

The name “Russian Roulette” was a perfect match for the name of the tenth novel from the Alex Rider’s series. Not only due to the back story of the infamous hired assassin, Yassen Gregorovich, growing up in Russia and having such a dangerous profession from a young age. There is imminent danger of him losing his life and he continues to do it on his own accord, bearing much resemblance to the game of Russian roulette.

Casino Roulette – Same Risk and Rewards But No Danger 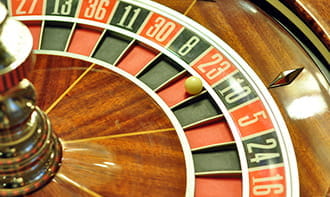 Although danger can sometimes be exciting, there is no need to risk your life in order to feel a strong thrill. You can go ahead and head to an online casino and play a real roulette table game, where you can get your adrenaline pumping and win big! If we have piqued your interest, you can visit our online roulette casino list and try out any entry that seems exciting. Don’t forget to claim your bonus when you register at the casino. All of the listed brands are thoroughly certified by multiple major government entities as well as being audited by independent third-party organisation, such as eCOGRA.

Of course, roulette is not the only game that you can play at the best online roulette casinos. You can also partake in other table games, such as blackjack, poker, baccarat and many more. Almost every establishment can offer a rich library of slots, which are always some of the most played games. If you love the real experience of gambling in a land-based casino but would like to do it from the comfort of your home, you can enjoy the live casino games section.